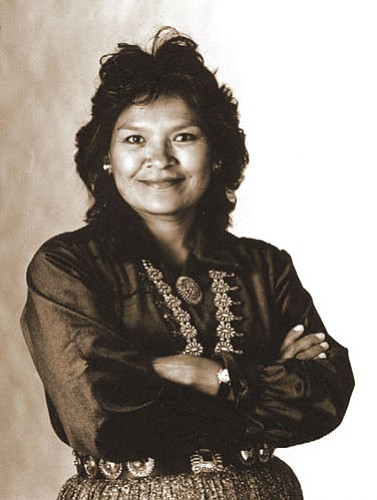 "I didn't just wake up one morning and think, 'I want to serve my community - I think I'll run for Coconino County Supervisor,'" Fowler said. "I've been serving for a long time, and the Board of Supervisors is a way to work for the people at another level."

When Fowler, Diné, learned of current District 5 Supervisor Louise Yellowman's pending retirement, she decided to run for the position.

Fowler looks to water as the most important issue to northern Arizona. In 2006, Fowler was appointed to the Navajo Nation Water Rights Commission, and represents them at the Coconino Plateau Water Advisory Council.

"I've worked on water rights for some time," Fowler said. "Our challenge is that we are short of water. This shortage affects us all and we need to find solutions as a region. We all pump water from the ground, and we are not replenishing it [like] southern Arizona, which is storing water."

Fowler continues to look towards a western Navajo pipeline as a solution, where water would be brought from Page to Flagstaff.

Water quality is also a concern and Fowler lists Cameron as an example.

"Even though there is [tap] water, people cannot drink it," Fowler said. "It contains [unsafe levels of] uranium and other contaminants, and people have to haul water from public water sources."

"In 1980 we were not aware of the effects of uranium and how it impacts society - we didn't know what we were getting ourselves into," Fowler said. "But we became educated. We learned from the Tuba City hospital about birth defects and other health issues."

The group was also unaware that the Tuba City dump, where Rare Metals material had been buried, would be the site of a uranium plume that is steadily moving through the underlying aquifer towards the Hopi villages of Moenkopi and Lower Moenkopi, threatening their sole source of drinking water. Fowler is one of many working to address this issue today.

Economic development is also important to District 5, which includes constituents from both reservation and non-reservation areas.

"Economic development is a buzz word these days," Fowler said. "I believe in sustainable development on a community, regional and state level. I recognize the interconnectivity of a community and its economy. We need to build infrastructure and labor force. We want to bring in business that is willing to work with and understand the values of the community.

"As members of the ... Board of Supervisors, we don't start businesses - we work with communities to see what their visions are," Fowler said. "Happy, healthy communities are the result."

In 1990 through 2003, Fowler was a founding member and the board president of Tuba City Cultural Projects, Inc. The organization restored the 1916 Krenz-Kerley Trading Post as a community library.

"A library is important to a community," Fowler explained. "We accommodate students from grade school through college. People go there to do research. Adults use the Internet, and tourists come to check their e-mail and to stay in touch with family and friends.

"Education is very important," Fowler continued. "You must have resources [and] a library to support education."

Fowler has a strong background in health issues. She was the president of the Association for Indian Self-Determination in Health Care from 2002-2005. Fowler was a founding member and vice president of the Tuba City Regional Health Care Corporation Board of Directors, where she negotiated the second largest Indian health care contract in the country. As she worked towards her doctorate degree (she holds a BA in Community Development and Public Affairs), she compared Navajo teachings to western perspectives of diabetes.

"I've worked with the County as well as the Nation," Fowler said. "I served as a member of the Coconino County Jail Task Force, working on the planning and feasibility study for the new jail. I served as a staff assistant to U.S. Senator John McCain from 1990 through 1996, when the senator was chairman of the Senate Select Committee on Indian Affairs."

"A community is a systemic organization - all issues are interconnected. You can't just focus on one area. I've been involved in Head Start, the Foster Grandparent and Senior Companion programs. I've worked in health care and environmental issues. While I was in college in Durango, I volunteered at a nursing home and was a Big Sister. I've touched every area of a community. I am qualified, I have experience and I continue to educate myself," Fowler said.

"Coconino County and the Navajo Nation are in a time of transition, and face many challenges," Fowler continued. "Issues know no boundaries. The Nation and County must partner up ... to address the common issues facing us."

Fowler credits the many people who have influenced her, including Navajo Nation President Joe Shirley Jr. (she was his campaign manager) and Annie Wauneka.

"It's the people you meet in life who build up who you are," Fowler continued. "It takes a lot of people to accomplish goals, people from within the community. After the library was established, I told everyone, 'If you bought a plate of spaghetti at our fundraisers, you helped build the library.' It was the Tuba City community and region that restored that building."

"I found myself at a point where I could serve people at another level," Fowler said. "I will represent and fight for the people, for a safe and healthy community. I will continue to protect the land and natural resources. My career has impacted the community in a positive manner. If elected, I'll bring the strength of who I am, my experience, and my commitment."