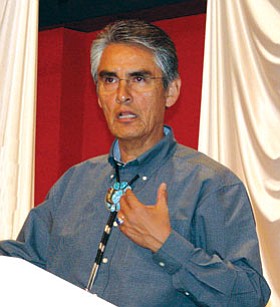 President Shirley said the Navajo people expressed their desire to see the Council reduced to 24 members in a 2000 tribal referendum, that they still support it, and that he told them he would pursue it diligently in his second term.

During his April 21 State of the Navajo Nation address, President Shirley announced the formation of a Presidential Task Force on Government Reform.

"I campaigned on it, and now we're going to start," he said in an interview with the Associated Press. "The people talked about it. The people want it. It's their initiative."

President Shirley said he expected a reduction in the Council's current size would greatly improve government efficiency and effectiveness, balance power between the legislative and executive branches of Navajo government, significantly reduce micro-management by Council oversight committees, return the legislative branch to its intended policy-making function, and vastly cut the bloated cost of the Council's operations and expenses.

In the Sept. 5, 2000, referendum, 22,081 Navajo voters - more than 70 percent of those who voted - approved reducing the Council to 24 delegates. However, despite the supportive popular vote in favor of the measure, it failed because its language required a majority vote in each of the 110 chapter precincts, which is considered nearly impossible.

On Tuesday, President Shirley's office submitted ballot language to the Navajo Nation Election Administration on the two initiative questions. Now, an estimated 16,000 petition signatures must be gathered and certified for the measures to be included on the Nov. 4 Navajo Nation Chapter Official General Election ballot.

President Shirley said he hopes to obtain as many as 25,000 signatures within 90 days to ensure that the measure is on the ballot when a high turnout is expected for the U.S. presidential election. Navajo law allows six months to gather the signatures.

One ballot measure would allow voters to choose whether the number of Council delegates should be reduced to 24 members. If voters agree, the Council reduction would apply to the Council delegate election in November 2010 and become effective on Jan. 11, 2011, when the next Council takes office.

Upon approval, the Navajo Board of Election Supervisors would immediately begin reapportionment planning. According to the measure, those plans would be presented to, and be approved by, the current Navajo Nation Council by Aug. 15, 2009.

Should the Council fail to approve reapportionment plans by that date, the initiative authorizes the President to develop and approve the plans by Oct. 30, 2009.

Information accompanying the proposed ballot language states that the Navajo people have determined that "maintaining an 88-member Navajo Nation Council is a burden on the tribal treasury."

"In addition to the annual $25,000 salary," it states, "each Council Delegate receives deferred compensation, stipend payments to attend regular and special standing committee and subcommittee meetings, as well as travel reimbursements and per diem payments for regular and special Navajo Nation Council Sessions."

"Delegates also have the privilege of obtaining interest-free loans in the form of salary advances. Delegates also qualify for fringe benefits, which include 401(k) plans, retirement, and medical coverage. An 88-member Council under this benefit structure is an extreme financial burden on the tribal treasury."

The summary also states that the Council "spends an excessive amount of time addressing administrative matters as opposed to enacting positive law."

The other ballot measure will ask voters whether to give the President line item veto authority over budget items contained in the annual Navajo Nation Comprehensive Budget or supplemental appropriations approved by the Navajo Nation Council.

If voters agree, that authority would become effective immediately and no Council override would be permitted.

Last July, the Council rejected legislation that would have given the line item veto to the President by a 41-to-25 vote.

The Council will often amend legislation from the floor by attaching "riders" that add millions of dollars in supplemental funding that have nothing to do with the original legislation.

The latest example was in January when President Shirley sought $1 million for emergency services to deal with a snow and mud weather-related emergency. Because the Council added an additional $16 million in non-emergency spending to the legislation, the President vetoed it.

In his veto message, he said he was extremely concerned about the constant waiver of the Navajo Nation Appropriations Act and other Navajo laws.

"We need to refrain from waiving Navajo law, and instead examine and determine which provisions of the law need to be amended or repealed if, in fact, our current body of law is not workable," he said

Yet, despite the Navajo Nation Commission on Emergency Management having lifted the state of emergency, the Council overrode the President's veto.

Since his first term, most of President Shirley's veto messages to Navajo Nation Council Speaker Lawrence T. Morgan cite the Council's repeated waiver of the Appropriations Act and other laws, its frequent depleting of the Undesignated, Unreserved Fund and various tribal trust funds, and its frequent approval of non-emergency supplemental appropriations.

"The current governmental structure lacks sufficient checks and balances between the Legislative and Executive Branches of government," states a summary of the line item veto ballot language. "This is evidenced by the Navajo Nation Council's excessive spending of public funds [and] its inability to maintain the Undesignated, Unreserved Fund Balance at an amount required by law."

The summary also states, "the people have also determined that a need exists to control excessive spending of the tribal treasury by the Navajo Nation Council, and that the only way to do so is to authorize the President of the Navajo Nation to have line item veto authority."

According to the ballot language, the only way either initiative could be repealed or amended is through another initiative process rather than by Council action.