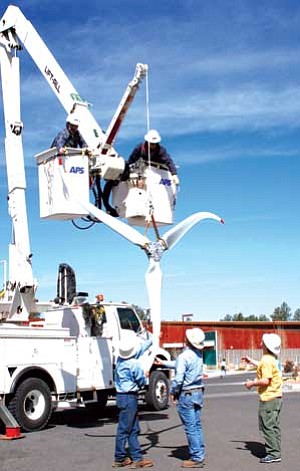 FLAGSTAFF, Ariz. - Northern Arizona meteorologists predicted winds to increase as Coconino Community College celebrated Earth Day two weekends ago. But that was a good thing as CCC installed a wind turbine on its Lone Tree Campus on April 19.

"If it's a windy day we'll be able to see the blades turn as it generates electricity and sends power into the college's grid system," said CCC Construction Management Department Chair Joe Costion. "However, if it's too windy, we'll have trouble raising the 45-foot-tall wind turbine."

The Skystream 3.7 was donated by Southwest Windpower, the world's largest small wind turbine manufacturer. It will be able to produce some 1,800 kilowatts of electricity when the wind is blowing, enough to light up 18 100-watt light bulbs or power three average offices on the Lone Tree Campus.

The project to install the wind turbine has included a hands-on teaching element as CCC and Northern Arizona University (NAU) students have been pouring concrete and connecting electrical wiring.

"The students have loved it," said CCC construction management instructor Paul Thomas, an electrical design engineer for Southwest Windpower. "They've learned how both the solar and wind systems work in a grid-tied setting or in an off-grid setting."

The Skystream 3.7 is designed for residential use and has been installed around Coconino County. "It's the kinetic energy in the wind that creates electricity," said Southwest Windpower electrical design engineer Mike Clifton.

Wind energy is part of the Alternative Energy Program at CCC. Currently students can earn a certificate or an associate's degree. "Clean energy is the way of the future," said Costion. "It's here now. The wind power industry has grown by 43 percent over the last three to five years and we're training people for jobs in that growing industry."

At the ceremony, CCC President Leah L. Bornstein signed the American College and University Presidents Climate Commitment, a nationally recognized document that has been signed by more than 500 colleges and universities including Arizona's three state university presidents.

"CCC is definitely a leader in sustainable energy in northern Arizona," said Thomas. "The new wind turbine on the CCC campus will serve as a symbol of the college's commitment to teaching and practicing clean energy solutions."