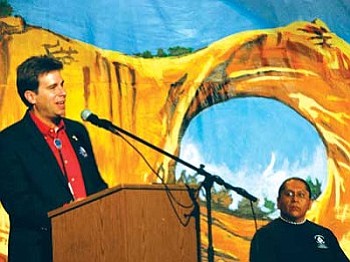 Over 150 participants attended a series of workshops and lectures on environmental issues.

Stephen Etsitty, head of the Navajo EPA, introduced Shanker and lauded Shanker's long-standing legal career on behalf of protecting the rights of individuals, communities and Native American tribes in precedent-setting cases. Etsitty also recognized Shanker for his outstanding work on the San Francisco Peaks litigation and his representation of the Navajo Nation on uranium contamination issues.

In November, Shanker represented a delegation of Navajo who were testifying in front of Congress on the ravages of uranium contamination on the Navajo Nation.

Before an audience that included representatives of the U.S. EPA, the Navajo EPA, tribal council members and a number of concerned citizens, Shanker discussed the issues of radiation contamination, and the importance of protecting sacred sites for future generations.

He also discussed the importance of the Navajo concept of "Hozho," translated as the "beauty way," or "living in harmony and balance with nature."

Shanker praised the Navajo EPA for their emphasis on "Protecting Mother Earth for future generations" and for their dedication to balancing modern laws and requirements with traditional cultural values.  He talked about the importance of teaching the concept of Hozho to the rest of the people of the world to help promote global balance and harmony and respect for the earth.

Shanker also highlighted the inequities in the federal government's cleanup of uranium refuse on the Navajo Nation, "over 60 years after the federal government contracted with private companies to process and mine uranium on the Navajo Nation, the toxic legacy still exists."  He talked about the human tragedy that has taken its toll in the form of increased cancer rates, kidney failure, and Navajo neuropathy in uranium-impacted areas of the reservation.

Recently, U.S. Rep. Raul M. Grijalva endorsed Howard Shanker in his bid for Congress. Grijalva previously held hearings on proposed legislation that would stay pending uranium mining near the Grand Canyon.  Shanker, along with many community and tribal leaders attended the hearings that were held in Flagstaff.  As an attorney, Shanker fought to save the Grand Canyon from a land exchange that would have promoted large-scale commercial development that would have negatively impacted the canyon, as well as the economies of Flagstaff, Tusayan, and Williams.

Shanker also created precedent for the protection of desert washes and is one of the attorneys on the case that recently kept the Desert Nesting Bald Eagle from being taken off of the endangered species list.  He has also been an advocate for the protection of the Verde River, the San Pedro River, and Oak Creek.

Shanker currently represents the Navajo Nation, the Yavapai-Apache Nation, the White Mountain Apache Tribe, the Havasupai Tribe, the Sierra Club, the Center for Biological Diversity, and others, in the case that is fighting to keep the federal government from allowing the use of reclaimed sewer water to make snow on the San Francisco Peaks.

Shanker, who received his law degree from Georgetown University in Washington D.C. while working for the U.S. Department of Justice, was appointed by President Clinton to serve a three-year term on the National Environmental Justice Advisory Council, Enforcement Subcommittee.