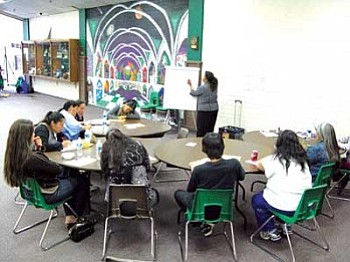 Speakers for the youth and adult focus group present their group’s concerns in front of the audience of the Equal Voice for America’s Families meeting on Saturday. Approximately 150 Native Americans gathered at the Saturday meeting to discuss the concerns of indigenous families in northern Arizona (Photo by Sam Stoker/NHO).

FLAGSTAFF - On April 26, approximately 150 Native Americans, primarily from the Hopi Tribe, gathered at Flagstaff High School as part of a nationwide campaign designed to gather and make heard the concerns of families across the country.

More than 240 non-profit organizations are sponsoring some 40 gatherings nationally as part of the Equal Voice for America's Families campaign.

Dana Russell, chief executive officer of Native Americans for Community Action (NACA) said the goal is to make policy makers aware of the desires of working class and poor families.

"Too often politicians tell us what they think, this is an opportunity to let them know what the people have to say," Russell said. "Instead of the legislature determining the needs of society, society should determine its needs and tell them. Right now legislators are so isolated from communities they make the wrong decisions."

The Flagstaff gathering, which was hosted by the Hopi Foundation and NACA, and which was funded by the Marguerite Casey Foundation, was unique in that it was the only Equal Voices' town hall meeting in the country focused principally on the concerns of Native American families, Russell said.

The meeting began early Saturday with a hilarious performance by the Brown Comedy Show that had the crowd rolling, but discussion quickly delved into serious social issues plaguing Native American families after the audience broke up into five focus groups.

The division into groups, which included a youth group, an elderly group, as well as Hopi, Navajo and youth and adult groups, was intended to allow varying viewpoints about current issues to be easily heard. However, at the final presentation, during which each of the five groups shared their conclusions, it was obvious that everyone was concerned with similar problems.

The most common thread linking all the concerns expressed was the deterioration of Indigenous culture.

"A major concern of our group was how the loss of traditional values has resulted in a loss of respect - respect for the self, families and elders," said Beatrice Norton, a Hopi woman who spoke for the youth and adult group. "There is a lack of respect in all of society, not just amongst the Hopi."

During the focus group sessions the question was asked: "Is our world better or worse than the world our parents and grandparents lived in?"

Steve Darden, master of ceremonies and a group facilitator, spoke at the final presentation and said their group concluded the world is worse today than before.

"Our culture is disintegrating. There is a loss of identity and traditional ways," Darden said. "Young people lack discipline and respect. They focus on material things too much."

Other issues discussed concerned education, the loss of Native language, economic problems on the reservation, drug and alcohol abuse, health and the environment.

Concerning the issue of education Darden said, "We must continue to create educational opportunities for our children, not just in the white man's ways, but in traditional ways, There is a lot to be learned from sitting around fires with elders."

He further added there is a need for the entire community to relearn traditions, learn about sustainability and to learn a whole new way of living.

On the economic front, Maureen Romero from the Yavapai Apache Nation said the cost of housing was a major problem affecting families.

"We live in a world where both parents need to work, where everyone needs to work just to have a house. We don't cook anymore, instead we eat out; we can't be together like we want to be."

It was also realized by most in attendance that substance abuse was a huge problem. Darden said it was difficult because while alcohol abuse is an ongoing problem, abuse of new substances, such as methamphetamine, is new and something most parents know little about.

Major health issues brought up revolved around matters such as the lack of health care provided on the reservation to overmedication of children.

"We are concerned about our kids being put on medication," Romero said. "We need to understand why our children are who they are and to do that we need to look toward traditional ways. Families need to come together and help one another solve the problems our children are going through."

The youth group, consisting of teenagers and young adults - and whose futures were largely the focus of the entire meeting - echoed the adults and elders by expressing desires to maintain their culture, language and traditional ways. To do so they stated it was necessary for youth to be heard by their communities and to have an opportunity to participate.

"We also want things to change," one spokesperson for the youth group said.