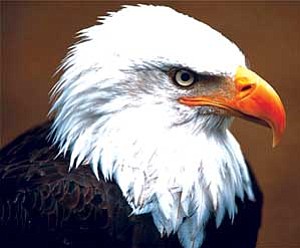 The endangered status of the desert nesting bald eagle was recently reinstated after an October 2006 delisting by the U.S. Fish and Wildlife Service.

San Carlos Chairman Wendsler Nosie Sr. hailed the decision saying it was stunning because Native Americans never get the courts to rule in their favor.

"This gives us a door of opportunity to do as much as we can for the desert nesting bald eagle," he said.

The Center for Biological Diversity and Maricopa Audubon Society won a federal district court lawsuit against the U.S. Fish and Wildlife Service (USFWS) that will force them to continue Endangered Species Act protection for the desert nesting bald eagle.

In October 2006, the USFWS rejected a challenge to increase protection for the nesting bald eagle and remove it from the agency's effort to remove the Endangered Species Act protection from all bald eagles.

The tribes and the environmentalists successfully argued in federal court that the desert nesting bald eagle is unique. There are only about 50 breeding pairs that are "reproductively, geographically, biologically and behaviorally distinct from other bald eagle populations."

On March 5, Federal District Judge Mary Marguia reversed the USFWS's 2006 decision, ruling it "arbitrary and capricious and contrary to law." The judge reinstated Endangered Species Act protection for the nesting bald eagle and its habitat in Arizona.

She further ordered the USFWS to complete a reevaluation within nine months.

Chairman Nosie said he hopes the federal and state governments revisit what they mean when they use the word "consultation" with tribes. He said the USWFS said that it had consulted with the tribes in this case, but he considered their talks with the tribes inadequate.

Chairman Nosie said the federal and state governments should be talking to the tribal councils on the reservations when they are "consulting," but instead they often talk to department workers and "never get the true stance of the tribe."

He said when the federal and state governments "consult" with the tribes that they often don't tell them the decisions that are about to be made. He added that this was the case in the tribe's attempt to protect the red squirrel on Mt. Graham.

Chairman Nosie said protecting the desert bald eagle isn't only in the interest of the tribes involved, but for all Arizona tribes and all Arizonans.

"It's in the best interest to protect the environment, the land and the water," he said. "Non-natives don't realize that protecting the desert bald eagle also protects the water and land."

For example, Chairman Nosie said that protecting the desert bald eagle would mean that mining would not be allowed in their habitat.

"This is not only for the Native tribes, but for all the people in Arizona," he said. "If anyone calls Arizona home, they need to preserve what makes it beautiful."

Judge Marguia observed that USFWS drew an irrational connection between the facts and their decision to delist the Arizona nesting bald eagle. She added that the USFWS had marching orders to fit with their expected finding of the desert bald eagle.

"These facts cause the court to have no confidence in the objectivity of the agency's decision making process," she wrote.

The lawsuit followed resolutions by the San Carlos Tribe, Intertribal Council of Arizona and National Congress of American Indian calling for protection of the desert nesting bald eagle.

"The bald eagle is part of our connection to the great creator," he said.

Chairman Nosie said the bald eagle is the caretaker of water and if it's delisted the water would be in jeopardy. He said the protection of the bald eagle through the Endangered Species Act keeps industry from polluting the state's rivers, but he added if the delisting occurs then industry would be given free rein to pollute.

"If the eagle is delisted then people will kill eagles for profit. It will put people in position to make money," he said.

Sandra Rambler, cultural advisor to the San Carlos chairman, said the eagle plays an important role in the lives of Native Americans and Indigenous people throughout the world.

"They're the crux of our tradition," she said.