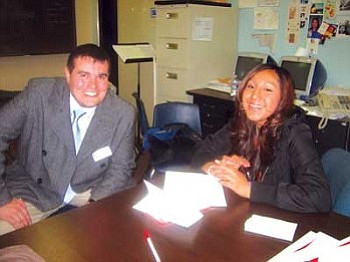 Palmer, who is based in Oklahoma, said journalism no longer refers to just print and broadcast, but Internet, photo journalism, videography, web newspapers, public relations and marketing.

Palmer, Kiowa, said it is important to have Native American journalists so they can tell their own stories in their own words.

"We need a voice," he said. "We need more storytellers."

Palmer, whose father is a Kiowa linguist, said that Native American journalists can dispel stereotypes such as the notion that they continue to live in teepees. He said this way they can give the rest of the country and the world a better understanding of Native culture and promote cultural identity.

"You'll be able to take current issues to a national audience," he said.

Palmer said journalism also gives youth an outlet to express themselves. He added that journalism could be used to make tribes politically stronger.

Palmer said Native Americans are often transforming. For example, many still play 49er (powwow) music, but many also are now into rap. His point is that the media can be used to address issues ranging from music to drugs.

Palmer urged all Hopi High School students to go to college whether or not they're going to take journalism classes. He emphasized that if students earn a BA degree that they will make about $1.5 million more during their lifetime than students who don't get a college degree. He said when students get college degrees and make more money that they come back to work in their communities and it helps their communities.

Palmer said of all the skills they need to go to college that writing is at the top.

"Writing is important because you have to do it everyday," he said.

"This is a fabulous school and I've been to a lot," he said.

Palmer said compared to Hopi High School that one of the Native American schools he visited in California "is a ghetto compared to this."