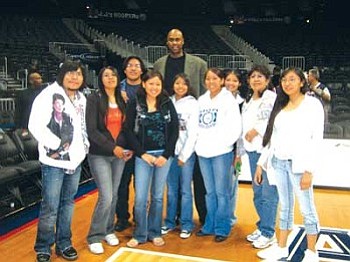 ATLANTA, Ga. - The Atlanta Hawks defeated the Milwaukee Bucks 115-96 on March 26. Seven members of the Hopi High radio class saw most of the fourth quarter action and were excited to stay after the game to meet Atlanta Hawks Assistant Coach Alton Lister and player Josh Smith.

Lister said that this is his first year coaching at the professional level and that he previously coached at Mesa Community College for seven years.

"The Hawks have improved a lot. We have already won six more games this year than last year," he said.

The Hawks obtained guard Mike Bibby, formerly of the Sacramento Kings, in a trade earlier this season. Lister said the Hawks have improved since obtaining Bibby.

"He is a good point guard that can score and defend," he said.

Lister said he loves to be the assistant coach and that someday, he wants to be a head coach in the National Basketball Association (NBA). Lister likes to see youth at the games because everybody gets into the game.

"It's entertaining and a lot of fun," he said.

Lister talked about his style of coaching. "I like to coach with a system of good defense and offense. Defense and rebounding is more important than scoring," Lister said.

Lister said he also played in the NBA for 17 years with Milwaukee, Seattle, Golden State and Portland.

"I enjoy coaching the Hawks because the NBA is the highest level in basketball. I also wanted to help the athletes improve on their game and extend their careers," he said.

Paul Quamahongnewa writes for the Hopi High Bruin Times and is also in the radio class.