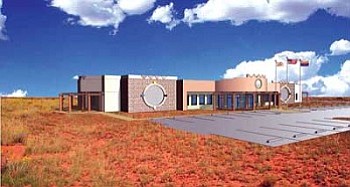 DILKON - The Judiciary Committee of the 21st Navajo Nation Council participated in the traditional Navajo ground blessing ceremony for the new multi-purpose building that will house the Dilkon District Court on April 4.

Judiciary Committee members, Vice President Shelly, and Sen. Hale all expressed their appreciation and support of the local chapter government and the Dilkon court staff for their help in making this project a reality.

Kee Allen Begay Jr. (Many Farms/Round Rock), chair of the Judiciary Committee, said that the day's event "was just the beginning of the committee's duties and responsibilities of implementing a strong judicial service system for the Navajo people."

This building was made possible by a $2 million appropriation by the state of Arizona through a joint effort by the Judiciary Committee, the legislative, judicial, and the executive branches of the Navajo Nation. The Navajo Nation has also provided funding to match the state's allocation.

The facility will help with the community's current needs and its anticipated growth. The state of Arizona also plans to utilize some of the space for state court hearings as well.

The 14,000 square foot facility - designed to reflect Navajo customs - will be constructed on 2.3 acres on the corner just north of milepost 55 along Navajo Route 15.

The purpose of the court facility is to provide judicial services to the people of the Navajo Nation, particularly for residents living in the communities of Dilkon, Indian Wells, Greasewood Springs, Tolani Lake, Birdsprings, Teesto, White Cone, Leupp, and Jeddito on the Arizona portion of the Navajo Nation.

"There is endless work that needs to be accomplished and the Dilkon District Court is a prime example of how the Navajo Nation can work in a joint effort with other entities in addressing many issues that the nation faces," Begay said during his address to the event attendees.

Begay explained that as chair of the Judiciary Committee, he saw the need for the expansion of judicial services on the Navajo Nation. Through this need, the committee initiated the process to ask for state funding to build the much-needed facility in Dilkon.

"This was a three-year effort," Begay said. "It seemed like it was endless traveling down to the Arizona State Capitol for meetings with key Arizona officials, including Governor Napolitano - but, our efforts have finally paid off."

Begay said that many residents near Dilkon have to travel more than a hundred miles to request judicial services, this is because of Dilkon's distance from other tribal court locations on the Navajo Nation.

The current Navajo district courts are experiencing an increase in court cases and the Judiciary Committee initiated this effort for the new Dilkon facility to help alleviate the workload for the other district courts.

The building is scheduled to be completed by mid-February. An official groundbreaking ceremony will be held next month.