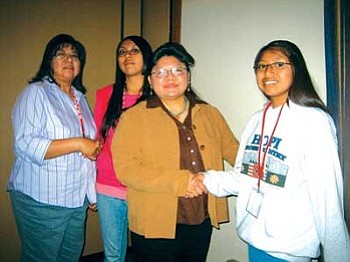 ATLANTA, Ga. - Seven Hopi High radio students were able to attend the National Federation of Community Broadcasters Conference here March 25-29 because of donations from those in the field.

Jackie David and Joelle Mansfield were funded by a donation by the Hopi Foundation, the policy arm of KUYI, also known as the Hopi community radio station.

Johnetta Honie and Francine Sisto had their registration fee paid by KTNN, the Navajo Nation radio station, after they won a read-off contest against their fellow radio students.

Honie, a junior, told KTNN listeners that the conference was good experience.

"It's helping me overcome my shyness. I might eventually go into radio," she said. "I enjoy everybody here because they've been complimenting us."

David, a senior, told the KTNN listeners that she learned a lot at the conference and finds radio interesting.

"I'd like to learn more and go on the air more," she said.

David plans to major in elementary education at Coconino or Scottsdale Community College, but she would also like to minor in broadcast journalism.

Sisto, a senior, told the KTNN listeners that she liked sharing ideas with people from throughout radio country.

"It's nice listening to them," she said. "It's their own world. We tell them about our Hopi High Teen Show, and they're interested in what we do."

Sisto plans to major in elementary education at Pima Community College or Ft. Lewis College. She would also like to minor in broadcasting.

Smiley, a senior, told the KTNN listeners that she will look into broadcasting. She is a cross country runner who plans to attend either Mesa Community College, Ft. Lewis College or NAU.

In later interviews, Sisto, Mansfield, Honie, David and Smiley spoke about the impact the conference had on them.

Sisto said she was happy with the first day of the conference when she had a chance to meet youth from other radio programs. It was also the first day that she learned about the First Amendment.

"We're given a lot of freedoms, but we also have limitations," she said.

Sisto said she enjoyed a session led by Dick Brooks about professional radio interviewing skills. He spoke about questions that should and shouldn't be asked. Sisto said she can use these skills during her interviews on the Hopi High Teen Show on KUYI. The show airs from 2-2:30 p.m. Thursdays.

She said the conference could be improved by having more workshops for the youth. She said the radio conference encouraged her to want to produce more radio interviews.

Mansfield, a sophomore, said she learned a lot including how to use a music library. She also enjoyed the session by Brooks.

"I wish the conference had more youth stuff. It seemed like it was mostly for adults," she said.

After attending a listening session she could see what radio people produce and she would like to produce more pieces. But she doesn't necessarily want to go into radio for a career.

"I just like doing it for fun," she said.

Mansfield said she appreciated learning about the First Amendment because in most cases "people can't tell you what to do."

Honie said she learned a lot from the sessions.

"It made me think about things that we could possibly do," she said.

Like the others, Honie enjoyed the session by Brooks, but wished there were more sessions for youth.

Honie wants to major in nursing at University of Arizona or Ft. Lewis College, but would consider minoring in broadcasting.

David said the best part of the conference was meeting new people and getting to know them. She especially enjoyed meeting Nishat Kurwa from Youth Radio out of Oakland.

"She was talking to everybody. She was fun and enthusiastic," she said. "The conference was a good experience. It made me think about radio more."

David enjoyed being interviewed on KTNN.

"I was never interviewed before and I enjoyed saying hi on the radio to my family," she said.

"There was a lot to learn about rights and how it ties into taking photographs," she said.

Smiley said the entire conference was good and she appreciated learning more about how to do interviews. Like the other students, she wants to produce more radio pieces.

She also appreciated learning about the First Amendment.

"I didn't know there were so many possibilities about how the First Amendment could be used," she said.

All four students who were interviewed on KTNN said it was "cool."