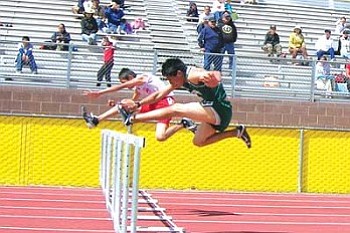 Darnell Phillips (foreground) of Tuba City battles a rival from Monument Valley in the 110-meter hurdles at the Chinle Wildcat Invitational.

With the most outstanding performance of the day, Tricia Curley of Tuba City solidified her rank as the number one female shotputter in Arizona's 3A division. Her put of 36' 7" is currently more than two feet better than the second best 3A division mark.

This ranks Curley ninth among all female shot putters in Arizona. Showing a wide range of talent, Curley scored 18.5 points for the Lady Warriors by running an outstanding leg on their winning 4x100-meter relay squad, and adding a personal best 95' 0" throw to place third in the discus.

For the men, the Warriors' victory was led by sophomore Ryan Yazzie who won the 800 and 1,600-meter runs, anchored Tuba City's winning 4x800-meter relay, and ran the fastest leg in their second place 4x400-meter relay. In one of the most exciting races of the day, Yazzie trailed the lead pack by more than 25 meters entering the final straightaway, but used his potent finishing kick to catch Ganado's Andre Sample and win by 9/100ths of a second, 2:07.85 to 2:07.96. Middle distance races are rarely decided by less than a tenth of a second, but the women's 4x800-meter relay was the closest of all. Tuba City's Tatiyanah Johnson received the baton for the final leg a full 20 meters behind Chinle's anchoring runner. Johnson caught her rival with 200 meters to go, overtook the lead with 150 meters left, lost the lead with 50 meters to go, and then made a final push to win by 8/100ths of a second; Tuba City - 11:13.33, Chinle - 11:13.41.

Johnson also won the women's 800-meter, placed second to teammate April Tracy in the 1,600-meter, and anchored the victorious 4x400-meter relay to lead the Lady Warriors with 23 points. With her wins in the 1,600, 3,200 and a leg of the 4x800-meter relay, Tracy was nearly as productive with 22.5 points. Yazzie led the scoring for the men's squad with 24.5 points. Senior distance standout Lance Williams was close behind scoring 20.5 points (first - 3,200-meter, second - 1,600-meter, first - 4x800-meter relay), and Vince Begay was next with 18 points earned from a win in the discus and second place in the shot put.