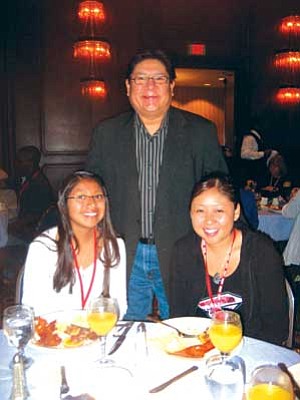 Hollie Manheimer, executive director of the Georgia First Amendment Foundation, led a discussion with about 45 youth on the importance of the First Amendment.

"It gives everybody an equal voice and it can create a free flow of ideas," she said.

Manheimer said the First Amendment protects freedom of the press whether in print or broadcast, but added that there are some restrictions. The most obvious one is that somebody cannot stand up and yell fire in a theater when there isn't a fire.

The questions involving when the First Amendment can or can't be used usually involves the time, place and manner of free speech.

Manheimer said as a free speech attorney she doesn't always like her clients. For example, she defended a WICAN, or somebody who believes in witches, right to free speech. But she found out the WICAN was also a child molester and she didn't like them.

Michelle Israel, a television journalist in Atlanta, told the students to get a pocket copy of their reporting rights and keep it in their pocket when they are doing stories.

"Know your rights," she said.

Israel said reporters often can get the information they want if they use diplomacy.

"Know your rights," she said.

Capelouto also warned the students not to accept public record documents from somebody else because there have been many times when people forged documents. She said governments have to give reporters documents, but private companies do not. However, reporters can learn information about private companies by looking on the stock exchange.

They can also learn about private companies by seeing if the company has lobbyists because lobbyists must register with the government.

Ginny Berson, coordinator of the conference, said the First Amendment is the pillar of democracy. She said Iran has shut down 11 newspapers and the government runs the media. In China, protests are not allowed.

She also noted how finances can influence public policy. For instance, if a news company owns a nuclear power plant, would the employees have to be told to not criticize the plant?

Berson pointed to a school newspaper in Illinois where the advisor was not retained because she allowed someone to write a first person story on drug use.

"We need media heroes and First Amendment warriors," she said.

NFCB, in association with the Georgia First Amendment Foundation and the Radio and Television News Directors Foundation, trained the radio students in radio journalism and the First Amendment. The project was funded by the McCormick Tribune Foundation.

Second, he worked alongside of Carro Hua from Boston and Lomayaoma to produce a radio piece about Auburn Avenue in Atlanta where Martin Luther King was born. His role in the project was the editing while Lomayaoma and Hua provided the announcing, performed interviews and wrote the scripts.

Quamahongnewa also learned how to use the Audacity radio editing equipment.

The trio's work will be published and produced into a CD that the First Amendment Project hopes many radio stations will use. This project started with the students doing research, then walking Auburn Avenue to observe and interview people.

"The best part was going out and recording the sounds and learning how to approach a story," he said.

Quamahongnewa, who plans to attend college and major in sports broadcasting, said the conference could be improved by extending it and by having more leaders work one-on-one with youth.

"I want to learn more about editing, producing and how to use your personality on radio," he said.

Lomayaoma, a senior, said going to Auburn Avenue and the church where King attended gave them an interesting perspective on King.

Lomayaoma, who plans to major in journalism at Ft Lewis College next year, said she hopes the piece they created ends up on the radio.

"We learned a lot about Martin Luther King, how he helped his people and where he and his wife are buried," she said.

Lomayaoma said she learned editing skills and how to use the Audacity radio editing program.

"The best part was going out and interviewing different people," she said.

Lomayaoma said she would like to hear more examples of how people put their radio interviews together.

"Learning about the First Amendment was good. I'll use it because I learned it's used so people can speak their mind," she said.

After that, they attended a listening session and later a presentation about what type of questions to ask or not ask during radio interviews.

During the listening session, they listened to selected radio productions. One was an Irish ballad about why people don't like marriage. Another was a youth piece by Youth Radio about how some youth are afraid of relationships.

A new term the students learned during the conference was "frenemy." Many radio people have to compete against each other, but they make it a friendly competition so they are friends and enemies.

Dick Brooks, a national journalism trainer, spoke to adults and students about the types of questions to ask.

Brooks said reporters should stay away from multi-part questions because many people won't remember the second or third part. Sometimes this allows the person being interviewed to take over the interview because they chose which part of the question they want to answer.

Brooks warned reporters about using trigger words - words that offend people. For example, John Candy was being interviewed by Peter Zosky in Canada. Candy was on a book tour and Zosky asked him if he was "hustling" books. Candy was offended by the word "hustling" and it made the interview awkward.

Brooks told the reporters that they should stay away from yes/no questions and ask more open-ended questions. He said that reporters can get better by listening to radio or television broadcasters to see what type of questions they ask.

Brooks said radio is a medium of emotion and heart, not fact, although facts can be used to make the case.

He said the best questions are open-ended, simple/short, neutral and bland questions that can obtain colorful responses.

Burt Poley, network manager for Native Voice One (NV1) in Albuquerque, N.M., recounted how he started his radio career at KUYI on the Hopi Reservation. He then worked at KNAU in Flagstaff before taking a job at Koahnic Broadcasting.

At first, he was the program director for four shows before becoming the key person for NV1.

Poley, who is Hopi, said he learned broadcasting at KUYI and technical aspects at KNAU.

Taylor, who is also Hopi and former station manager of KUYI, said Native Public Media wants to find ways to train youth and help other radio people connect with each other.