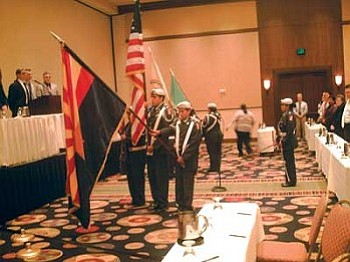 Education Line Officers received awards for schools that were no able to attend due to travel distances across the United States. Representing Hopi Jr./Sr. High School were Principals Glenn Gilman and Albert Sinquah. The individuals presenting the awards from the Bureau of Indian Education were Majel Russell, Principal Deputy Assistant Secretary Indian Affairs; Jim Hastings and Bart Stevens.

After retiring the colors the Color Guard members returned back to the Hopi Reservation that night.

The events for the day included the cadets doing pull-ups, sit-ups, push-ups, a one-mile relay with a rifle, litter carry, and tug-of-war. Not only was Sinagua hosting a Raiders meet but also an Academic Challenge. Eleven Hopi High cadets competed that day; there were three males and eight females.

Even though the Hopi High cadets did not place that day, they had fun participating with the other schools. Before the meet, the coach of the Raiders team Sgt. First Class Nance told the cadets, "No matter what the outcome, the only thing is that you have fun."

The cadets' next big event will be their Military Ball, which will be held in May.