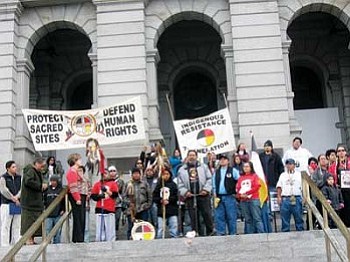 DENVER, Colo. - On Monday, March 24, the Northern Route of the Longest Walk 2 arrived at the Colorado State Capitol and held a rally and press conference.

The press conference began with a proclamation from the Governor stating, "The state of Colorado recognizes the participants of the Longest Walk 2, welcomes them and encourages people around the state to take heed of their message that promotes peace, justice, environmentally friendly practices, and awareness of those in the Native American community that suffer. Therefore, I, Bill Ritter, Governor of Colorado, do proclaim March 2008 Longest Walk Month in the state of Colorado."

Following the Governor's proclamation read by Ernest House Jr, (Ute Mt. Ute) he stated, "Protection of Sacred Sites is something the state of Colorado continues to promote."

Longest Walk 2 participant Weldon Austin (Western Shoshone/ Paiute) then read a statement on behalf of the Western Shoshone Defense Project, "Newmont knows they are operating on Shoshone lands in Nevada. They have been told of the ongoing human rights violations and that the open pit cyanide mining are in violation of our traditional teachings."

The Western Shoshone Defense Project also offered support by stating, "This walk, The Longest Walk 2, is about protection and healing."

The walkers continued from the State Capitol to the Newmont Mining Corporation headquarters to stand in solidarity with the Western Shoshone people in their effort to bring a commitment from Newmont Mining Corporation to respect spiritual areas on their land and to invite them to support the Longest Walk's mission to protect sacred places across the country. A prayer vigil was held outside of Newmont headquarters where prayers and support were offered.

Following an initial refusal by Newmont to meet with delegates from the walk, Jimbo Simmons, coordinator for the Northern Route of the walk, was able to successfully deliver the message asking Newmont Mining Company to stand up and be a leader in the mining industry and make a commitment to respect spiritual areas and adopt the corporate policy presented to them by Western Shoshone Defense Project in 2006.

Returning from Newmont Headquarters, Longest Walk 2 participants took a moment at the Civil War Memorial and Sand Creek Massacre Plaque in front of the State Capitol to offer prayers before the walk heads to the Sand Creek Massacre Site April 4-6. The Longest Walk 2 is stopping in communities all across Turtle Island to listen to Native peoples concerns, document and deliver them to officials in D.C. They plan to bring the issues of sacred site desecration and environmental destruction facing the Western Shoshone Nation to the US Government upon arrival in Washington, D.C.

After their Pueblo visit, the Longest Walk 2 will continue to the Sand Creek Massacre Site. For a complete itinerary, specific directions and additional information visit www.longestwalk.org.