Red Ink Magazine is the future of native art 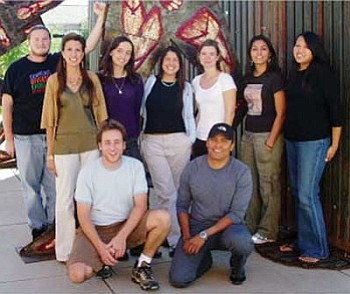 TUCSON - The pages of Red Ink Magazine are filled with contemporary native experiences expressed through art, writing and photography.

In 1989, Red Ink began publishing on the campus of the University of Arizona, under the American Indian Studies Program.

On April 18 Volume 14.1, titled "Native Voices," will premiere at the University of Arizona Poetry Center, beginning at 6:30 p.m.

Jessica Metcalfe, editor of Red Ink since 2004, says Dine' writers and artists are usually featured in most issues of the magazine.

Metcalfe is Turtle Mountain Chippewa and a PhD student in the American Indian Studies Program at the University of Arizona.

She said the student-operated publication magnifies fresh native artists, photographers and writers, usually according to a theme for the issue.

"We often focus each volume on a certain topic, such as stereotypes and identity, the environment, humor and taboo, and pop culture," Metcalfe said. "We're interdisciplinary in nature and we highlight the interconnectedness between aesthetics, poetics and scholarship."

The premise is that individuals from differing fields allow innovative thinking designed to reach a broader audience while advancing the dialogue through thematic content, she said.

Red Ink adds to the discourse on subjects important to native people through the presentation of new viewpoints to the community level, she noted.

The genesis of Red Ink was humble enough, born in the basement of the American Indian Studies Program at the University of Arizona in 1989.

Metcalfe said, "(Red Ink) was meant to highlight various issues going on in Indian Country and to provide a forum for discussion of these issues.

The influx of students and faculty meant the character of the magazine adapted accordingly. The current editorial content showcases native art, reflecting the interests of the editorial board.

Metcalfe says it's difficult to decide what's published, especially with the large number of submissions they receive. Keeping the page count to a publishable number (140 pages) means a blind review process.

Seven hundred copies are printed per edition and distributed through institutional and individual subscriptions. Because of the high quality full-color pages, Metcalfe said the cost breakdown comes to about $10 per copy.

"We want to honor our contributors with high quality printing and publication," she said.

The cover of the new issue was designed by Ryan Red Corn, who believes native media is just beginning to speak with a voice on a mass scale.

"The democratization of publishing makes Red Ink and self publication possible," Red Corn said. "What was previously nearly impossible for indigenous people to do in urban centers can now be done 100 percent from the rez.

"This is a huge shift in access and is just now starting to be realized," he added.

Red Corn doesn't think natives have any reason to fear the digitization of art and native media. Automation and digitization only enhances the message, he said.

The future of native art isn't going to be hard to find, he said.

"The future can be found on the covers of Red Ink," Red Corn said. "However, I feel many of the artists I count as colleagues will not be fully recognized for their impact on the next generations of artists until many years from now."

One of those artists is also another frequent Red Ink contributor. Douglas Miles produces skateboards and was the cover artist for Vol. 7.2 in 1999.

Miles believes the future of native art will lie inside the unknown native kid who skateboards, or the girl who takes photos of friends for Myspace.

"The future of native art must not, nor will it be determined by institutions, galleries, museums, collectors, anthropologists, publications, markets, or contests of technique," Miles said.

Instead, he said the future will be determined by unfettered, unbridled, unhindered complete self expression and creative control. It will be a future where the artist will pick not only their medium and subject matter without regard to marketability.

"The future of native art will be based on freedom, not boredom; self expression, not oppression," Miles concluded.

Another ardent supporter of the magazine is Bunky Echo-Hawk, who was featured in Vol. 13.1 (Spring 2007). He also did live art paintings at the last two Red Ink premiere parties.

Echo-Hawk believes Red Ink is important because it provides a counter balance for native identity in the mass media.

"While other native art magazines propagate stereotypical art, Red Ink showcases the real deal," Echo-Hawk said. "Red Ink is the other side of the coin."