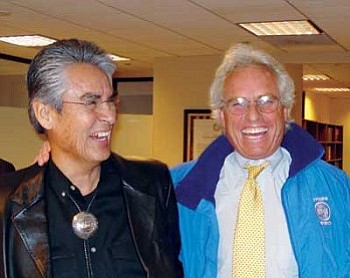 Navajo Nation President Joe Shirley Jr. and Citizens Energy Chairman and President Joseph P. Kennedy smile for the camera after signing an agreement that will promote the development of wind energy projects on Navajo lands (Photo by Deswood Tome/NNWO).

The agreement validates the progress of nearly two years of pre-development work that has been carried out by DPA and Citizens' wind development division, which has developed wind and renewable energy projects throughout North America.  According to DPA's General Manager, Steven C. Begay, "wind, solar, and other renewables are essential to a balanced energy future for the Navajo Nation, the US, and the global community.  Citizen's demonstrated commitment to bringing benefits to Native communities was essential in the decision to proceed with this developer."

"We are proud to join together with the Navajo Nation on this important endeavor," said Kennedy.  "This project has the potential to develop more than 500 megawatts of wind energy, which will provide sustained economic and environmental benefits for the Navajo people."

Early estimates anticipate the Diné Wind Project could produce between $60 to $100 million in revenue for the Navajo Nation over the lifetime of the projects, not including the jobs, improved quality of life and environmental benefits.

Citizens Energy Corporation and its subsidiaries have developed renewable energy, electricity transmission and trading, and energy efficiency projects throughout the world for nearly 30 years.  Citizens has worked closely with First Nations in the United States and Canada.