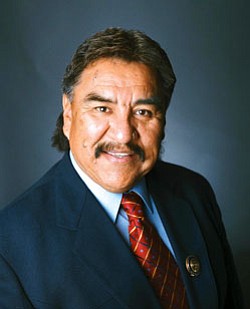 The Navajo Nation Council supported the Desert Rock Energy Company with a 66 to 7 vote to approve the business-site lease on May 13, 2006.

"The 21st Navajo Nation Council has already supported the Desert Rock project and their decision has already been made," Speaker Morgan said.

Most recently, DPA was successful in obtaining the approval for the business-site lease, which was approved on May 26, 2006. As head of the Legislative Branch of the Navajo Nation, Speaker Morgan has been very significant through the process involving the Desert Rock project.

Discussion on Desert Rock began in 2003. The air permit, which is in Region 9, is in its final review. The Environmental Impact Statement is almost complete, and the comment period has recently been extended to allow for more technical comments. The new due date for comment submission is Oct. 9.

Once the comment period has closed, there will be a period of review by the cooperating agencies that consist of tribal, state and federal agencies. The agencies will make their final decision shortly thereafter.

DPA relies consistently on three committees within the Legislative Branch that provide oversight. The Economic Development Committee administers the process for the DPA business-site lease. The Resources Committee is responsible for providing the right-of-way for water, and the Budget and Finance Committee provides oversight for project funding in cooperation with the entire Navajo Nation Council.

Dirk Straussfeld, executive vice-president of Sithe Global Power, added that DPA and Sithe Global have been actively meeting with their assigned committees. In the near future, DPA would like to present their findings to the Navajo Nation Council.

Straussfeld added "We appreciate Speaker Morgan, President Shirley and the entire Navajo Nation Council for their continued commitment to the project."

Steven Begay, DPA general manager, echoed Sithe Global's support for Speaker Morgan, by saying that he appreciates the help that the Office of the Speaker has provided in this process and thanks Speaker Morgan for managing the legislative process.

"Future Council sessions will certainly address additional issues related to Desert Rock and Speaker Morgan will continue to play a significant role in improving the quality of life on the Navajo Nation," Straussfeld said.