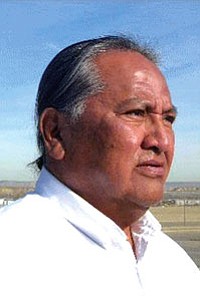 "It is a pleasure and honor to appoint you to serve as chief justice of the Navajo Nation Supreme Court," President Shirley wrote on Sept. 5. "Your permanent appointment shall become effective upon confirmation by the Navajo Nation Council."

President Shirley said the confirmation of Chief Justice Yazzie could occur during the fall session of the Navajo Nation Council.

Chief Justice Yazzie is the second Navajo lawyer to serve in the top positions of all three branches of Navajo government following the late Navajo Nation Chief Justice Claudeen Bates-Arthur.

"It is evident from your past performance as probationary chief justice that you possess the knowledge and skills necessary to serve as our permanent chief justice," President Shirley wrote. "I am confident that you will continue to perform your duties with integrity and impartiality."

Chief Justice Yazzie has always worked with the Diné in public service. He served as attorney for DNA People's Legal Services and was legal counsel for the Kayenta Township. He was a school board member of the school at his community and later a member of the Executive Board of the Navajo Area School Board Association.

He also worked as an attorney for the Yavapai-Apache Nation. He served in the U.S. Army in Vietnam.

He is a 1975 graduate of Arizona State University College of Law. He has been a Utah State Bar member since 1976 and is a member of the Navajo Nation Bar Association.