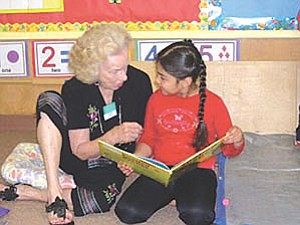 A volunteer reads to a five-year-old at the Pathways to Learning Kindercamp—one of many successful programs instituted in northern Arizona by Alliance for Children’s Early Success (ACES). This literacy camp takes place in Flagstaff Unified School District elementary schools for five weeks during the summer (Courtesy photo).

In today's fast-paced world where the most important elements of our societies seem to be electronic, it's nice to know that preschool-aged children are at the forefront of at least some people's minds. This fact can be seen locally by the volunteer organization called Alliance for Children's Early Success (ACES). This board is comprised of individuals with hearts so big and warm they devote their entire lives to honoring the boundless potential for all children age 0-8.

The goals of the group are to improve quality affordable childcare, equalizing the playing field for all children age 0-8, increasing parent and community education, and making health access available to these children and families.

The mission of the group is to see that all children 0-8 receive quality care and developmentally appropriate education in our communities.

The group meets monthly and members have nothing on their minds but action.

"What I've learned through working with this group is that they don't like to sit around and talk; they like to do," ACES chair, Julianne Hartzell of the Flagstaff Community Foundation.

The members currently include childcare providers, community service advocates, healthcare workers, teachers, parents, early childhood education professors and more, but these members are determined to recruit each and every aspect of our society. Their current sights are set on members of the business community as no member represents that segment of the community.

"ACES brings people passionate about Early Childhood together," ACES vice-chair and Northern Arizona Head Start assistant director Seobaghn Arambula explained. "There isn't territoriality. People are there thinking about what's best for children that age. People have been able to move off their personal agendas.... It's just people from a variety of places putting the needs of the children first. There are some gaps. We'd like to have more parents and business representatives. That philanthropic piece is really critical-and the faith-based piece."

At the September meeting of ACES, the members opened with a discussion of the 2006 passage of Proposition 203 in 2006 and the subsequent developments since then.

Prop 203 established an additional 80-cent tax on each pack of cigarettes purchased by an individual. These funds go directly to the Arizona Early Childhood Development and Health Board also called the First Things First Board (FTF). The money will be spent solely on programs for early childhood development and health to build on funds already being expended by the state and federal government for the benefit of children five and younger.

These new monies cannot be used to offset state spending on programs already receiving state appropriations. The state's current revenue projections indicate that approximately $150 million per year will be generated.

The funds have yet to be tapped into. Since the passage of the initiative, the state has been gathering information about community needs throughout the state through various needs assessments. These evaluations will be complete by Dec. 15.

Powell explained that the FTF board is currently evaluating the needs of the state in preparation for dissecting the state into regions that would receive the FTF funding. She said that recommendations as to where the lines will be drawn would be made to the board at the Sept. 26 meeting. However, the boundaries will not be established until 2008, following the decision of each tribal government to either participate within a state region or request a solitary region including the tribe alone. These tribal decisions are not due until March 1.

Powell indicated that the Navajo Nation and Hopi Tribe have expressed interest in "going solo" due to the unique nature of the reservation boundaries and student needs.

"A lot of people are very concerned that the money isn't moving yet and I can't emphasize enough that this is the development stage when crucial foundational work is being done," Powell said.

Also during the meeting, the various successes of ACES were highlighted. These fulfilled goals include development of a website (www.allianceforchildhood.net); publishing a child care guide and early childhood brochure; organizing Kindercamp (a summer camp for preschoolers); and many more including the establishment of a lending library on the NAU campus. This library will be open to all educators, child care providers, parents, practitioners, students and others who are in need of learning more about early childhood education.

The grand opening reception for the library will be held from 5:30-7 p.m., today, Sept. 26, at the NAU College of Education Curriculum Lab located in the Eastburn Education Building. For more information call Deb at (928) 600-0675.

ACES members explained that the 'community' includes any interested person-from Flagstaff, Coconino County and more. Refreshments will be served.

The next ACES meeting will be held from 3-5 p.m., Wednesday, Oct. 3, at the Head Start Sunnyside Training Facility located at 1825 N. Main St. in Flagstaff. Each meeting is tentatively scheduled at this time on the first Wednesday of each month. Any interested individuals are welcome and encouraged to attend. No dues or commitment is necessary. For more information contact Trudy Rogers at (928) 773-9813 or e-mail trogers@nazunitedway.org.