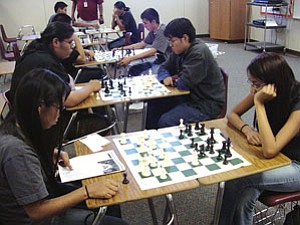 Members of the TC High Warrior Chessmen team contemplate their next moves.

TUBA CITY-Well thought-out strategy, nerves of cool steel, dead-on confidence, these are just a few of the skills and character traits that a winning chess team must possess.

Chess coach and mentor Michael Belinte stated, "This year's Warrior chessmen look promising in defending their current regional title. This year we have returning players who were also part of that regional championship team. They include Benjamin Wheeler, Matthew Brodie and Eugene Maloney. We lost Sekourtney West to graduation and Ryan Mathais transferred to another off-reservation school. Now I have Daniel Quiels (junior) and Devin Begody (freshman) taking their spots. The rest of our team members include Brianna Mark (freshman), Shelby Goldtooth (sophomore), and juniors Philomino Shebala, Garris Tacheene Alex Magee, Hapezibah Skacy and Tania Raphael."

Belinte added, "This year there are two teams that TC High will have to watch out for and that is Blue Ridge High and Alchesay High. Right now we are ahead of them but not by much. There are chess teams like us who are young but I think our past regional winning experience will put our Warrior Chessmen at the top. At the state level, Catalina Foothills out of Tucson is the No.1-ranked Arizona team-they are currently the 2007 High School National Chess Champions. I know our team will be in the final top 10 in the state."

Belinte's top two players this year are juniors Benjamin Wheeler and Matthew Brodie. Wheeler took the Regional Individual trophy last year and he is looking forward to defending his individual winning status. Brodie has improved overall from last year and is set to play key games for TC High.

Each TC High player must exhibit and practice discipline by studying game openings and endgames.

Several of the TC Chessmen like to study their favorite chess legends, like Robert J. Tischer, Jose Capablanca, Anatoly Karpov and Garry Kasparov, who all are former World Chess champions providing inspiration and tactical planning for their games.

On Nov. 2-3, Tuba City High School will host the 2007 AIA State Team Championship. They are hoping that both Navajo Nation President Joe Shirley and Hopi Tribal Chairman Ben Nuvamsa will accept their invitation to formally open the ceremonies at these state games.

For more information about the TC High Warrior Chessmen, contact the TC District Office of Public Relations at (928) 283-1185.