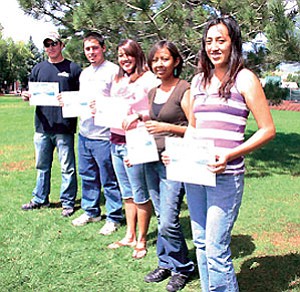 To speak with students embarking on their career path is truly inspiring; and the inspiration found in the hearts and minds of the Northern Arizona University (NAU) Ottens' Foundation scholarship recipients is nothing less than remarkable.

"I like chemistry, but also want to be a pediatrician," Gomez said. "The reason why is a long story, but basically, my uncle was a doctor and I used to work in his office and saw how he treated his patients. A lot of things he did were different. The whole purpose of being a doctor is to help people when they're sick. So he never overcharged people; he never turned people away if they didn't have insurance or couldn't afford to pay. So he inspired me to be a doctor."

"My [older] sister wanted to attend school in Phoenix, and I went along with her to visit a vocational school there. So, I got really interested in going." Wilson remembered. "Also, I want to help my people. Back on the rez' there's a serious need for dentists."

This special award is not a monetary one alone. Rather, each recipient is enrolled in a unique program in which he or she is paired with an advisor from the NAU Native American Student Services (NASS) office.

The student is also enrolled in a research program in which he or she is paired with a mentor from their academic field.

Chase Voirin (Diné), an environmental science major from Albuquerque, N.M. is now in his second year as an Ottens' scholar. Voirin participated in a research project with biology professor Tad Theimer in which they studied the Abert's Squirrel or Tassel-eared Squirrel (Sciurus aberti), a tree squirrel that is native to the Rocky Mountains from United States to Mexico.

Voirin said the opportunity provided by Ottens' research mentor was perfect for his interests and scholarly pursuits.

"I'm from Albuquerque, so I really like hiking and the outdoors. This [type of research opportunity] gives you a pretty good perspective of what it would be like to have this type of job. It's the main field I'm interested in and I think this solidified my place and my interests. I think it will help me be more successful and more strong and confident in my program of study," Voirin explained.

Through the summer months Voirin returned to New Mexico and worked with the Navajo Nation Fish and Wildlife fisheries program in Shiprock. He said this work with the tribe was encouraging as he learned firsthand of the need for tribal professionals in the environmental field.

Buckinghorse said the progress and growth she sees with each individual is amazing.

"It's so exciting to see them grow-to see them learn how to network, ask questions and to give them direction. How students have worked outside the university at different places is so great," she said. "They're really out there to make a difference, so we try to give them the skills they need. They're so dedicated. I'm just so proud of them; I just want to hug them. I think through this program their path is stronger and their growth is just amazing."

According to NAU president John Haeger, NAU strives to be the nation's leading university serving Native Americans by expanding and developing educational opportunities through scholarships and fellowships to Native American students. The Ottens' Foundation scholarships are just one way NAU earned its number one ranking by the U.S. Department of Education for the total degrees awarded to Native Americans at the undergraduate, master and doctorate levels.