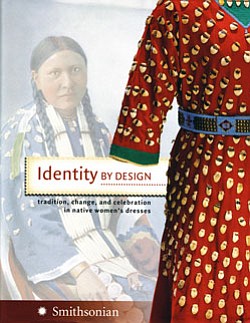 In considering the old adage "making a fashion statement," Native America takes the concept far and beyond the catwalks of Paris and New York.

In the introduction of the richly illustrated Identity By Design: Tradition, Change and Celebration in Native Women's Dresses, Smithsonian Books proclaims, "Dresses are more than simple articles of clothing for Native American women-they are aesthetic expressions of culture and identity. Embodying messages about the life of the wearer, dresses offer Native American women the opportunity to blend artistic tradition and bold innovation while preparing themselves, their families, and their communities to partake in the 'dance of life.'"

Featuring the National Museum of the American Indian's (NMAI's) collection of dresses and accessories as well as the insight and memory of contemporary woman artists, this book highlights tribal and family traditions from the Plains, Plateau and Great Basin regions of the United States and Canada.

This is a book that will make any bead worker drool, quite frankly. There are glass trade beads, seed beads, cowry shells, elk teeth, dentalia shells and "tinkly" cones. Some dresses are made from leather, others from wool trade cloth and cotton "every day" material. A history of multicultural contact is documented-"Chinese Red" vermilion marks the fur trade era of the 19th century, revealing a surprising global market. This pigment, derived from mercury, became a costly yet necessary item for the Blackfeet and Lakota as well as other tribes. Blue and green cloth was also valued. Buckskin has never lost popularity.

The tradition of richly decorated clothing is continued in the elaborate regalia of contemporary powwow where women and men demonstrate the organic change that allows for individual taste and meaning within parameters of tradition. Designs honor history as well as the present, even visions for the future-and represent personal stories as well as tribal customs and history. Even U.S. conflicts have been noted under the needle of industrious women-featuring designs from the Stars and Stripes all the way to U.S. Army Cavalry arm patches.

Interviews also reveal that some styles of clothing or beadwork are retired out of respect for a period of history or in honor of a person.

Contemporary women speak of the love for beading and design that only another artist would fully understand-rising at 2 or 3 a.m. to get in several hours of beadwork in before the family rises. They tell of how this spectacular art form carried women through the despair of a changing lifestyle at the hands of a conquering nation. Readers learn that the designs covering a cradleboard are more than just art-they actually provide protection for the growing child wrapped safely within.

Not all clothing is highly decorated. The book reveals the plain styles of clothing for high ceremony.

"Although the dress worn for a Sun Dance is usually new, it lacks ornamentation and is worn without moccasins or leggings. The woman stands alone, unadorned before her Creator," writes Colleen Cutschall (Oglala Lakota), a co-curator of the exhibit Identity By Design and a contributor to this book.

Cutschall shares a story from the Badlands of the Northern Plains that includes the adornment of a robe by a grandmother who holds the power of the future in her hands.

"A cooking bag begins to boil," Cutschall writes. "A grandmother sets aside a large buffalo robe and slowly gets up to tend her soup. As she stirs the sparse liquid and stokes the fire, her only companion, a dog, makes his way to her buffalo robe unseen. He paws at the newly sewn porcupine quills on the robe, undoing the design the old woman has just completed. As she returns to sit at her work, she sees that it has been undone. The dog shies away from her, perhaps sensing that he may soon be added to the soup. In Lakota oral tradition, this action is repeated over and over again. It is said that if the grandmother ever completes the quilled robe, then the world will end."

"East of my grandmother's house, south of the pecan grove, there is buried a woman in a beautiful dress. Mammedaty [Momaday's grandfather] used to know where she is buried, but now no one knows. If you stand on the front porch of the house and look eastward toward Carnegie, you know that the woman is buried somewhere within the range of your vision. But her grave is unmarked. She was buried in a cabinet, and she wore a beautiful dress. How beautiful it was! It was one of those fine buckskin dresses, and it was decorated with elk's teeth and beadwork. That dress is still there, under the ground."

Co-curator Emil Her Many Horses (Lakota) remembered this reading by Kiowa author N. Scott Momaday, from his book The Way to Rainy Mountain.

"As I reflected on the powerful image of the woman and her dress evoked by Momaday, I couldn't help but think of the stories my grandmothers told me about the dresses they once owned," Her Many Horses writes.

One grandmother sold her dress to a buyer at the local agency-an action she regretted in later years.

The other grandmother lost her dress during her naming ceremony.

"'I fought them for my dress.' The voice of my paternal grandmother, Emily Her Many Horses, was full of emotion as she told me the story of how she had been forced to part with her dress," Her Many Horses continues. "My grandmothers' dresses are probably still out in the world somewhere, perhaps part of a museum collection or treasured as another family's heirloom, but memories of these women and their dresses remain with me."

Identity By Design brings the memories of women and their dresses to the forefront-guaranteeing that the beauty of these women and their talent lives on into the future to inspire generations of women yet to come.