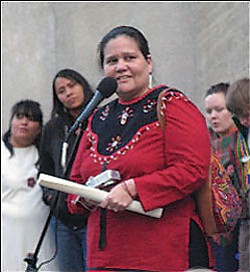 Beverly Jacobs of the Native Women’s Association of Canada at a New York rally in support of the U.N. Declaration on the Rights of Indigenous Peoples. At left, Faith Gemmell of REDOIL and Wahleah Johns, local Diné Black Mesa Water Coalition activist stand in the background (Photo courtesy of Amnesty International).

FLAGSTAFF-The United Nations adopted the Declaration on the Rights of Indigenous Peoples Sept. 13 at a meeting of the General Assembly in New York by an overwhelming majority.

Although the U.S. and Canada voted in opposition to the declaration, Native Peoples of what is now the U.S. hope the declaration will influence laws and federal policies affecting more than 560 Indian nations in the United States.

While the declaration is non-binding, it will still have a major influence on eliminating discrimination and human rights violations suffered by more than 370 million Indigenous Peoples worldwide.

Gwich'in leader Evon Peter, who currently resides in Flagstaff stated, "For over 500 years, the Indigenous Peoples of the Americas have been subject to exploitation and genocide, justified through declarations and laws of international institutions and national governments that deemed our peoples as possessing less than 'human status.' Passage of the U.N. Declaration on the Rights of Indigenous Peoples is pivotal in transforming that notion, so that we are justified in our struggles to maintain our rights to land, culture, spirituality and self-determination."

Representatives of Native Movement, Black Mesa Water Coalition, Save the Peaks Coalition, ECHOES and others were on hand to issue statements.

In support of the declaration, more than 25,200 people signed a petition coordinated by Amnesty International.