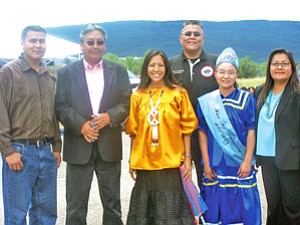 GLOBE-Several tribal groups are giving their support for Mary Kim Titla in her campaign to become District One's Representative in the U. S. Congress. The first step, however, is winning the Democratic nomination.

Having been raised on a reservation, Titla values the traditions and teachings of tribal nations and respects the rich diversity of tribes and recognizes their common issues.

"We need someone who can be a real voice for all people. I intend to reach out and better serve all citizens of District 1 no matter what background they belong to. It's important to elect a candidate who can relate to tribal groups on a personal, cultural and spiritual level. I believe I'm that person," said Titla.

An excerpt from the White Mountain Apache tribal resolution reads, "Ms. Titla is a member of the San Carlos Apache Tribe ... and has a long history of advocating on behalf of tribes in the state of Arizona and throughout the United States. Ms. Titla has been a strong supporter of the White Mountain Apache Tribe and other tribes as an advocate in the areas of gaming, education, social needs, economic development, youth and other areas. The candidacy of Mary Kim Titla for District 1, U.S. House of Representatives is hereby supported."

Excerpts from the resolution of the Western Navajo Agency of the Navajo Nation Council state, "Mary Kim Titla recognizes the need for honest, committed and positive leadership in government - at the local, tribal/village, state and national levels. The Western Navajo Agency Council recognizes the accomplishments of Mary Kim Titla and her committed leadership and advocacy on behalf of American Indian nations and Alaska Native villages and their members and applaud the efforts of Mary Kim Titla and endorse her candidacy for U.S. Congress."

After receiving her associate of arts degree at Eastern Arizona College, Titla earned a bachelors in journalism from the University of Oklahoma and a masters in mass communication from Arizona State University.

Widely known through her 20 years as a TV news reporter in Arizona, Titla is the publisher of Native Youth Magazine online. She is a member of the Point of Pines Cattle Association and Gibson Wash District Economic Enterprise Board.