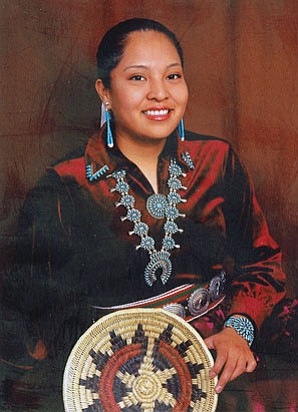 A recent photo of Mia Henderson in traditional Diné dress. During the early morning hours of Sept. 5, Henderson, a 2007 graduate of Tuba City High School, Manuelito scholarship recipient and University of Arizona freshman, was fatally stabbed by her roommate, Galreka Harrison, who Henderson accused of allegedly stealing a number of personal items (Photo by Rosanda Suetopka Thayer).

TUBA CITY-She was known locally and in Mungapi-Hopi villages by several affectionately given monikers: Princess Mia, Skipper, #15 and Mighty Mia.

Mia Janelle Henderson, a Navajo Nation tribal member, Tuba City High graduate and freshman at the University of Arizona (UA), was fatally wounded in a pre-dawn struggle with her roommate, Galereka Harrison of Many Farms, also a Navajo Nation member and a freshman at UA at their Graham Greenlee dorm residence hall.

Harrison is accused of stabbing Henderson as she slept and for later trying to make the slaying look like a suicide.

Harrison is being charged with first-degree murder and is currently being held in Pima County jail on $50,000 bond.

According to a probable cause statement filed in court, Harrison purchased a knife on Sept. 5. She was allegedly upset with Henderson for accusing her of forgery and personal theft, the document says.

After purchasing the knife, Harrison wrote a note, saying the forgery was false and that Henderson wanted to end her own life according to the court document.

The document also noted, "The victim was asleep in her own bed [and] the defendant left the note on the victim's desk. After several minutes to reflect on the situation, the defendant stabbed the victim numerous times. The victim died as a result of the injuries."

Harrison admitted to stealing Henderson's social security card and cashing a check for $500 just days before the slaying.

Henderson had filed a complaint with the UA campus police on Aug. 28, stating that Harrison had stolen both her social security card and her UA CatCard which is similar to an ATM debit card that can be used for university purchases.

UA police department spokesman Sgt. Eugene Meija was contacted, but did not return comment on the court document released on Sept. 6. The document was available through the Internet by late Thursday afternoon, posted as a public court document.

Just 18 years of age, Henderson was one of Tuba City High School's most promising young scholars and athletes.

The granddaughter of a former vice chairman of the Navajo Nation, Henderson had a long list of academic accomplishments.

Henderson was a Chief Manuelito scholar, which is the highest academic award a high school senior can receive from the Navajo Tribe. She was also a National Honor Society member, exceeded all three areas of the state-required Arizona Instrument for Measuring Standards (AIMS) testing, was one of TC High's top ten Seniors and an outstanding softball player, playing third base.

According to one of her favorite teachers, Kalen Smith, "Mia was the model student. There were never any incidents with her at all. She was completely responsible at following through with any assigned task and she was extremely generous in helping other students who were having trouble in class and she did it with such humor and grace." Smith is a science teacher at TC High.

Delores Hyden, librarian at TC High related a story that exhibited the humorous side of Mia.

"Mia was my student library aide and when we were putting together a list of students at TC High who had overdue library books, somehow Mia had overlooked one of her own book checkouts and she just giggled and said, 'Now how did that happen?'"

Smith related a story of how Mia came back home to Tuba City earlier this summer and made a special trip to each of her former teachers just to thank them for helping her become a successful college student.

"She was just so humble and I never knew a student to come back home and do this kind of thing. She was a real leader and her softball team just really looked up to her."

One of her closest friends at TC High was Chris Holve.

Holve was also a top ten senior and salutatorian of his 2007 graduating class, as well as the 3A North cross country state champion for 2007. Along with his mother, pediatrician Diana Hu, Holve held a special candlelight vigil for his best friend on the night of Sept. 5 at the TCHS softball field. The vigil was attended by over 200 friends, family and community members.

Several large poster boards that were printed with color photos of Henderson during her high school years held student signatures, final farewell words to her and words of comfort for her parents.

As shock and grief shook most of Tuba City in the two days following the initial news of Henderson's death, a new website at Yahoo.com emerged with messages of comfort for the Henderson family.

"To the family of Mia Henderson: I am Navajo and attending the U of A. Last year I was a part of the First Year Scholars Program (FYSP) and lived in the same wing. When I first heard of this incident I was in shock and disbelief. Although I did not have the privilege of knowing Mia, tears filled my eyes as I heard the news as were other students at U of A. My heart and prayers go out to you and all who are affected by this tragedy."

"I am a parent of another student who lives on the floor where this happened. I have been living in a hotel for the past few days with my child. I have no words for the pain that this has caused and yet I see great strength in the students at FYSP. The U of A staff has been working around the clock with our students. Godspeed Mia."

Prior to the vigil, a very gentle rain blanketed the Tuba City and Mungapi areas. In light of the tragic way that Henderson's life ended, it was a very fitting, comforting sign that she had made her transition into the next world.

"There is no death only a change of worlds ... our prayers and thoughts are with you and with Mia during her transition and journey to our creator. -The Hualapai Nation."

"My thoughts and prayers are with you in your time of deep grief, may your memories of Mia bring you comfort." - a member of the Hopi Nation.

"We were so sorry to hear of your loss. The thoughts of many of our tribal members are with you in this time of sorrow." - San Juan Southern Paiute Tribe.

At press time, Henderson's funeral and burial events were being finalized. Funeral services were held in Gallup, N.M. on Monday, Sept. 10 with a final burial at Sanostee, N.M.