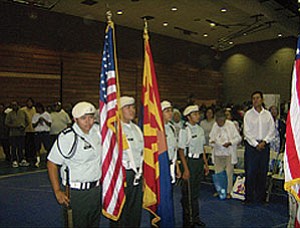 On Sept. 5, Hopi High School JROTC cadets were on the move into a new school calendar year. The new Battalion Commander, Cadet Lieutenant Colonel Leandra Calnimptewa and her staff traveled to Luke Air Force Base to update their 2007/2008 staff pictures.

The color guard, however, was invited by Leonard Talaswaima to the Hopi Civic Center along with the Hopi Color Guard Veterans, Post 80, to post colors for the Annual Special Needs Program.

Cadet Captain Brianna Puhuyesva said, "It was a good and educational experience that should happen more often on the reservation."

While class was in session at Hopi High School, the honor guard took an hour out of their morning schedule to post the colors and then return to school.

9-11 ceremony. Requests for the honor or color guard should be submitted in writing at least three weeks prior to the event to allow time for transportation coordination and parental permission.

The JROTC currently is taking orders for the Phoenix Suns vs. Philadelphia 76ers game March 1. They will also be hosting a 5K run/walk on Oct. 20 prior to the Second Annual Piestewa Drill Meet at Hopi High School.