For my grandfather, Part I 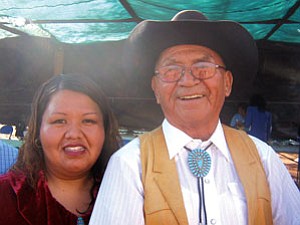 Who am I as a person? My best answer is that I am the creation of my Navajo culture and two people who loved each other. Everyday I struggle to understand this world I live in. The more I learn about my life in particular, I begin to understand more and more. It all sums up to this: my family.

About three years ago I was at my cousin's high school graduation reception when my Aunt Cecelia, my grandfather's eldest daughter, shared a story with us that has stuck so beautifully in my memory ever since. According to this story, my great grandmother, Anna Adakai Tsosie, said that one day as a young woman she was sitting in her traditional female hogan and made what looked like little foot prints all around her with her hands. That same night she dreamt that there were little kids running all around her, making noises and laughing. My great grandmother had always wanted a big family and longed for more children, since she lost two of her three sons. She did not know what the future had in store for her only surviving son, my grandfather, John Tsosie.

My Aunt Cecelia told this story so perfectly that I cried as I listened. Cecelia told us to take a good look around us because this is what our great grandmother, Anna, left us: a family, our culture, the land we were sitting on and, most importantly of all, our grandfather and, from that, our grandmother, too. I replay this story in my head over and over. I think back on my great grandmother's life, and I can only imagine what she and my grandfather went through in her lifetime.

The more I think about my great grandmother more memories of her come back to me. All these years have passed and I am grateful of all the wonderful memories I still have of her. There is one priceless treasure she left us with, my grandfather. Anna had three sons. Her first born died when he was three years old from unknown causes. Her middle son, named Nelson Lewis, died in 1945 at the age of 23 in Word War II. Her youngest son, named John Tsosie, was my grandfather.

My grandfather told us a long time ago that he only had one sibling who he grew up with, a brother named Nelson Lewis who was seven years and ten months older than him. It never even crossed my mind to ask my grandfather about his brother, until now. The importance of learning about my family history dawned on me. As his grandchild, I only knew of a brother he had named Nelson Lewis who died in a war. I didn't even know which war he fought in; shame on me for never asking more questions any sooner.

My great grandmother and my grandfather learned of Nelson Lewis' death after he died in Europe in 1945, five months before the World War II was to end. They were told that Nelson Lewis' remains were going to be brought back to the states. Sadly, they were told by the military that the family had to finance the transportation of his remains back to the reservation, if they wanted to bury him there.

The family could not afford to bring him home to Dennehosto, AZ, so my great grandmother allowed the military to bury him at a National Cemetery. She could not sign the documents, so she used her thumbprint. All these years have passed, and my grandfather still wishes his brother could have made it home to Dennehotso, AZ, for his final resting place. My grandfather never really had any kind of closure.

This past spring semester in college I took an American history class. I found this history class to be very educational and interesting. The more I learned about our country as a whole, I realized why we live in the society we do today. There was always this anger inside of me before, towards the government and white people in general for what the Navajo people were put through in the past. I am not a hateful person, but now I understand a little more. I realized my anger was because of ignorance.

There are hundreds of races with different ethnic backgrounds and languages that live in the United States today. A lot of them came here from other countries and took refuge to this country for a new and better life. I also realize we are all unique beings of this world, and we each serve a purpose.

One day during the semester I traveled home to Dennehotso, AZ. I was at my grandparents' house, visiting with them and talking to them. I began asking my grandfather about his brother. He said his brother, Nelson Lewis, was drafted into the military in 1943 during World War II. My grandfather recalled having a ceremony for his brother before he left for war. Nelson Lewis said he was not sure when he was coming home or if he was even going to make it home at all. The people present at his ceremony told him that was nonsense and that he shouldn't talk that way.

Nelson Lewis laughed after being told it was nonsense to talk that way. He also told everyone that he was going to fight in a war to help protect his country and he believed in fighting to protect his homeland so that it would not be taken away by foreigners.

Although my grandfather was only fourteen years old, he took his brother's advice and began looking for work when his brother left for war. He ended up working on the railroads, working for 50 cents a day, if he was lucky. Nelson Lewis left behind his home and the people he loved most in 1943.

Then after some time had passed he wrote another letter. In this letter he said he had reenlisted and he was going back to the war. Such bravery, I thought.