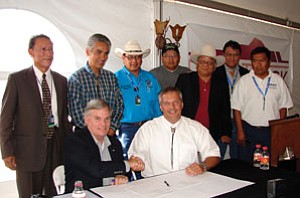 "This is something we've been talking about and planning for many years now, and finally we're bringing it to fruition," President Shirley said. "As president of the Navajo Nation, I don't like my people being dependent - dependent on anybody."

He said at one time the Navajos were known as very independent, very fierce and very proud.

"Along the way that was taken away from us, and now we have a good shot at getting it back," he said. "Desert Rock is one of the ways, one of the means, of getting back our independence, standing on our own two feet. And that's the way it should be. That was the way the Creator created us - independent, sovereign."

The project will provide more than $50 million annually to the Navajo Nation while providing thousands of construction jobs and more than 400 permanent jobs for Navajo workers. It also creates an opportunity for the Navajo Nation to acquire an ownership stake in the project.

Straussfeld said Fluor is a company that is large enough and capable enough to realize Desert Rock.

Dunning said Fluor Corporation has designed and built 204 plants, representing more than $2 billion of project volume in New Mexico and Arizona. He said it has designed 51 power plants in the last eight years.

The company is the only publicly-traded engineering construction company that has an investment credit rating, and it leads the industry in safety, with a record 11 times better than any other in the United States, he said.

He said the project will require 10 million hours of work by more than 2,800 workers over four years.

"We stand prepared to deliver on a world-class power generation project that will be the most environmentally-efficient plant in the United States," Dunning said. "Once completed, Desert Rock will have the lowest emissions of any coal-fired power plant operating in the United States."

The Desert Rock Project will be a 1,500-megawatt super-critical, low-sulfur, coal-fired power plant that includes Best Available Control Technology (BACT) to minimize plant emissions, improve plant efficiency and reduce water consumption. According to the U.S. Environmental Protection Agency, when built, Desert Rock will have the lowest emissions of any coal-fired power plant in the U.S., including a 15-to-20 percent reduction in carbon dioxide emissions. The project will also be hybrid-air-cooled, reducing water use by 80 percent.

In addition, Desert Rock has committed to financially support additional emission reductions projects at regional energy projects and to reduce mercury of at least 80 percent in accordance with a MOU signed with the Navajo Nation EPA.