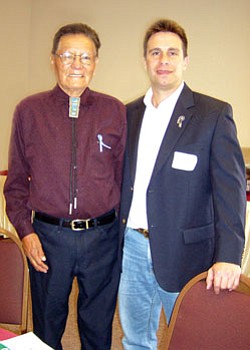 FLAGSTAFF-Last week the Diné Hataalii Association, a prestigious association of more than 300 Navajo medicine men and women, issued a unanimous resolution of support for Howard Shanker's bid for Congress in Arizona's Congressional District 1. Importantly, this is the first time that the Diné Hataalii Association has ever endorsed a congressional candidate and signals the success Shanker has gained in attracting bipartisan support from many facets of the Navajo Nation.

According to Shanker, "I consider the Diné Hataalii Association's show of support to be a great honor. I have learned a tremendous amount from traditional Navajo practitioners over the years and intend to follow many of their guiding principles once I am in Congress."

To learn more about Howard Shanker or to view a copy of the resolution, go to www.HowardShankerForCongress.com. You can also get campaign news at