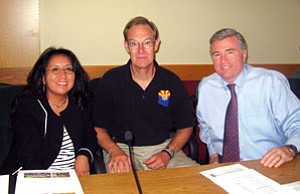 WINDOW ROCK-Navajo Nation First Lady Vikki Shirley reported to the Arizona Meth Project that 635 Navajo youngsters have pledged never to use methamphetamine-not even one time.

At the Arizona Meth Project Advisory Board meeting Aug. 14, which Shirley co-chairs, she reported that Navajo youth were eager to take part in the Arizona-wide Not Even Once community outreach pledge drive.

Among the Navajo pledges, she said:

- 155 from the Miss Navajo Nation's Youth Conference and President's Back to School Bash at Tsaile on July 29.

- 95 from the Native American Church Youth Day, held during the Drums of Summer in Teesto on Aug. 10.

The Drums of Summer event included a live radio broadcast with anti-meth use education by the Southwest Meth Coalition, Winslow Indian Health Care Clinical staff, and the Office of the First Lady.

"We appreciate the meth task forces and coalitions ... and the Navajo Nation Department of Behavioral Health in your continuing efforts and teamwork in the fight against meth abuse," Shirley said.

The Arizona Meth Project reports that methamphetamine is a real and growing problem in Arizona. According to the 2006 Arizona Youth Survey, 4.3 percent of our state's youth ages 13-17 have tried meth.

The Arizona Meth Project is a large-scale exercise in prevention, aimed at significantly reducing methamphetamine use in Arizona. The integrated program consists of an ongoing, research-based marketing campaign, supported by community outreach and public policy initiatives that realistically and graphically communicate the risks of methamphetamine to the youth of Arizona.

During the last Advisory Board meeting, Shirley asked that the media campaign be shared in northern Arizona, specifically on the Navajo Nation. Consequently, Arizona Attorney General Terry Goddard's office says radio messages will air on KTNN and KWRK next month.

Shirley said she encourages all Navajo parents, educators and community members, especially youth, to become aware of these messages that portray real and tragic stories of people across Arizona who have been affected by this devastating drug.

Many of the messages can be heard online at www.arizonamethproject.org.

Shirley said more Not Even Once pledges can be made by Navajo youth during the Navajo Nation Fair Ashkii Happy Youth Day from 10 a.m. to 3 p.m., Thursday, Sept. 6, at the Window Rock Sports Center. The event will be hosted by the Office of the First Lady.

On Sept. 12, the First Lady will join Attorney General Goddard in Phoenix to unveil the Not Even Once youth pledge campaign at the Arizona Science Center, 600 East Washington St., in Phoenix.

Among the other speakers will be Attorney General Goddard, Arizona Meth Project Co-Chair and Maricopa County Supervisor Don Stapley, and John Heitel, President of the Boys & Girls Clubs.

For more information, call the Navajo Nation Office of the First Lady at 928-871-7008 or email Staff Assistant Mona Seamon at mseamon@opvp.org.