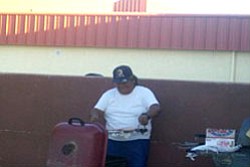 On Aug. 22, the JROTC Program participants held their annual Open House Night. Parents and cadets came to this special event, to see for themselves, what the Junior Reserve Officer Training Corps (JROTC) is all about. The evening started off with a briefing, which was followed by the serving of the food, demonstrations by the teams and the games planned for younger kids.

Following this discussion, the staff members introduced themselves and then presented their portion of the briefing. They explained what their positions and responsibilities are in the program.

When the briefing was done the food was served. After getting their plates of food and drinks, the parents and cadets went outside to the tables and enjoyed their meal. Donations of hamburgers and hot dogs were given earlier that evening to John Coochyumptewa Sr., who cooked them outside on the grill for the many hungry parents and cadets.

While the parents and cadets were eating, the four teams began their demonstrations. The first to demonstrate was the color guard team. They marched and carried the flags, showing what they do best at basketball games, school functions and parades.

Next, came the co-ed drill team, which performed movements and marched with white rifles, giving an example of what they will be doing in upcoming drill meets.

Then came the raiders team; they did warm-up exercises, sit-ups and the side straddle hop (jumping jacks). They will be doing these exercises at competitions such as the JROTC's Second Annual Lori Piestewa Drill Meet to be held Oct. 20.

Last but not least, the marksmanship team demonstrated the prone, standing and kneeling positions. These positions are used when team members are ready to shoot at the target.

When each of the demonstrations was complete, the games began. First, the four rounds of tug-of-war were played-females against males, cadets and kids. Then the next game was Simon says (drill down style). The game started off with about 20 cadets, but unfortunately, nobody won.

In order to make this event happen, the JROTC needed the help of every cadet. They needed donations of the food and a decoration committee. Even though it's early in the school year, they managed to pull together to make this event a successful night. This is only the first event the JROTC will be conducting, there is still much more ahead for the school year of 2007-2008.