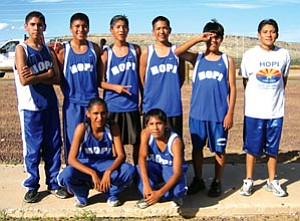 Host Hopi High grabbed second place in both the girls and boys races.

In the girls race, Coconino won with 73 points and the Lady Bruins placed second two points back with 75 points, Winslow finished third with 80 points and Tuba City High School placed fourth with 98 points.

Coconino's Hannah Moen took first place in the 89 runner race with a time of 20:23 and teammate Rochelle Kanuho took second just a step back.

Moen, a 17 year old senior, said it was cool winning the race because she stayed together with Kanuho.

"Last year, I was always behind her," she said.

The duo prepared during the summer by running six of every seven days with 40-70 minutes of running on each of those days.

Moen was also ecstatic because this is the first individual championship for her.

Coconino finished third at state last year, but lost only two to graduation and has its sights on the state championship this year.

"We have a good chance," Moen said.

Moen, who also runs track, is an honor roll student.

She hopes to earn a cross country scholarship to college in either Colorado or Oregon. She wants to study the sciences.

She is the daughter of Layne and Michelle Moen.

Tuba City's Lance Williams was the individual winner with a time of 16:58 in the 104 runner race.

Williams, a 17 year old senior, said the race was close with two Hopi runners and the Snowflake runner right on his tail.

Williams said the Warriors performed great, but that they will take it one meet at a time as he wouldn't make any predictions about regionals or state.

"We'll just see what happens. It's too early to tell," he said.

Williams, who wrestles and runs track, maintains a B average. He hopes to earn a cross country scholarship to college and major in pre-medicine.

He is the son of Eleanor and Don Williams.