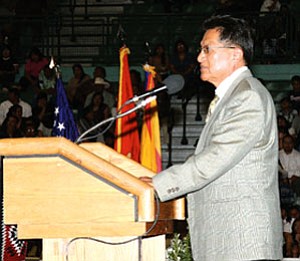 KYKOTSMOVI-After five months of waiting, battling and perseverance by the Hopi people and government, a decision regarding the fate of Hopi Chairman Ben Nuvamsa's stay in office was handed down Monday, Aug. 27.

Through this ruling, the actions of the Hopi Tribal Council and Vice Chairman Todd Honyaoma to nullify and void the Primary and General Elections, were deemed unconstitutional according to the Hopi Constitution. In an 11-page order, Resolution H-039-2007, was described at length as contrary to the interest not only of the Hopi and Tewa peoples, but all tribal members and U.S. citizens.

Although the Tribal Council and Vice Chairman have in many ways attempted to substantiate the aforementioned resolution including conducting a survey among residents of Oraibi, Bacavi, Hoteville, First Mesa, Sipaulovi and Kykotsmovi refuting the residency of Nuvamsa, filing a petition against his election and claiming tribal immunity, Hopi Tribal Court Judge Pro-Tem Geoffrey Tager ruled these acts as irrelevant and out of the scope and jurisdiction of the Council and Chairman, and therefore, ineffectual.

Included in the ruling were many prior cases pertaining to tribal law detailing the facts that "sovereign immunity afforded the Hopi Tribe flows to tribal official acting within the scope of their official capacities." Thus, because the acts of nullification were outside the constitution, tribal immunity was not possible.

In the final page of the ruling it reads: "An unconstitutional act is not a law; it confers no rights; it imposes no duties; it affords no protection; it creates no office; it is, in legal contemplation as inoperative as though it had never been passed."

Also included in the ruling was the need for Nuvamsa's certification by the Election Board to be upheld. This need was based upon the history of the Election board, which was initially established by a prior Hopi Tribal Council which was "far-sighted in adopting the Ordinance [instituting the Election Board] because of the clearly evidenced intent to have the Election Board be a separate entity, independently certifying candidates...."

Within the order, the sanctity of the election process and the right of each individual to have their vote validated was also referenced as being at the very heart of the order.

The order states: "The entirety of the said process is designed to foster confidence in free and fair Hopi elections."

Several attempts were made to reach the offices of the Vice Chairman, however, phone calls and emails were not returned.

Following the release of the order, Chairman Nuvamsa explained his satisfaction with the decision due to the implications it may have to the Hopi and Tewa peoples as well as other tribal nations.

"I hope that the decision is something that will stop this from happening ever again. I think that if it was to the contrary, it would have been bad for all other tribes as well," Chairman Nuvamsa said. "This is a victory for the people, and hopefully it restores confidence in the government."

Chairman Nuvamsa's press secretary Bonnie Secakuku explained that the time is now for the Hopi Tribal Council, Vice Chairman and Chairman to begin working together.

"That's why we're here. We have to work together. We're here to work for the people," Secakuku said.

"I have tried meeting, but they refused. We have a meeting set up for the beginning of September and I hope they will show up," he said. "We have a whole number of proposed action items on the agenda that we need to move on."

Chairman Nuvamsa detailed his intention to prioritize the Hopi Nation's policy regarding the treatment of sex offenders by the tribe, rather than by the state.

"But I think there's a lot of work to be done. That includes constitutional reform, voting ordinances, water rights, environmental policy and social services. I feel we owe it to the people to get these things done," he said.

Nuvamsa explained that through the turmoil surrounding his election and office, he has kept the best interest of the Hopi and Tewa people at the forefront of his mind.

"I have to look at things with the best interest of the entire tribe. I try not to let this effect me personally, of course it's hard not to, but I can't personalize things," he said.

As in the past, Nuvamsa based his persistence on the support of Hopi and Tewa peoples.

"Through this I think the support base has gotten larger. The general feeling among the people is that they're extremely frustrated. I've heard comments from those people who did not vote saying that it would not have mattered if they voted, because of what had happened... This is a matter of principle. Some people say they're not going to vote in the next election, but we're trying to change that. We fought so hard for the vote-we can't let that happen. The government belongs to the people. We're going to try to get everybody involved allowing for them to play their part and be active in the decision making. In the past decisions have been made in a vacuum."