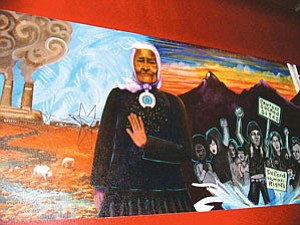 Part of the beautiful mural designed and painted by community artists including Cy Wagoner, Jake Fagura, Ave “the Peaks” Chee, Clayson Benally and “the Mural Mice” of Prescott (Photo by S.J. Wilson/NHO).

FLAGSTAFF-Visitors to the Pine Grove Shopping Center on Fourth Street cannot have missed the buzz of activity in one small retail space between the popular Hunan East restaurant and the Hancock Fabric store. A small army of teens and young adults volunteered hundreds of manpower hours to convert 1926 N. Fourth Street #7B into the Indigenous Youth Media Arts Center and Infoshop Bookstore.

Owners and employees of the nail salon that sides the center and bookstore were patient throughout hours of noisy labor including the removal of an old stained carpet, the tile floor beneath it, and finally the thick layer of glue that held the tile in place. The walls were freshly painted a dark red, shelves were put in place, and a new window installed before more decorating could be done.

Ultimately, what is affectionately known as "the space," was ready for the opening celebration on Oct. 25 from 6 to 9:30 p.m.

Crystal Uchino has been one of the volunteers who worked tirelessly to ready the space for its grand opening.

"There have been a lot of people, especially the youth, who have put in so much time and hard work setting the space up and getting it ready for the opening," Uchino said the following morning. "Last night, I think for all of us, was just really inspiring. There were around 200 people who came out from all different parts of our community. It was beautiful to see everyone there together, and that's the vision that we have for the space. We want it to be a place where people can come together in solidarity, share stories and resources, and be moved to act for social and environmental justice. Last night was an amazing start-it only grows and gets better from here."

Uchino believes that the action statement of the space sums up everyone's hopes and expectations for the space.

"We are an Indigenous-established volunteer-run collective dedicated to creatively confronting and overcoming social and environmental injustices in Flagstaff and surrounding areas," Uchino shared. "We are restoring and redefining knowledge and information in ways that will be meaningful to our communities. We offer access to independent media, the arts, and alternative education, with the goal of self-development as well as empowerment for youth and the greater community into action in favor of a more just and sustainable world."

The shop will include a library with books for purchase or borrowing, films and magazines. A small storefront offering books, music, art and other products will help support the space, Klee Benally, a founding member, explained at the grand opening.

Uchino said that the collective is working to establish more relationships with artists, and hopes to have workshops and events.

"We hope that people will stop by, get inspired, and get involved in the local, national, and global movement for justice," Uchino said.

"I know that our info shop will inform the community about what is going on in our society and world," Erik Peaches said. "This can provide many teens and adults a space to express themselves fully through media and arts. So all our time and effort we put into our shop was well spent to make a better world for me, you, our community and our future leaders."

Calvin Johnson, a grassroots leader in the Leupp community, offered his congratulations on the grand opening, describing it as a "wonderful event."

The space is modeled after the infoshop movement, and becomes the newest organization in an impressive list of other infoshops. There are many operating in Europe, with Germany listing over 60. Almost every large American city boasts an infoshop. They are described as "a cross between a radical bookstore and a movement archive" on one website.

These bookstores serve as a networking hub for activists and local activities, and are operated by volunteers. Due to the large number of movement papers, an infoshop is useful as a repository where individuals-unable to afford the subscription rates on so many-can keep people better informed about what is going on within their communities, and of the struggles and interests of others.

Benally had been quite resourceful in borrowing spaces in which to teach young Indigenous youth the art of filmmaking, but realized to be really effective he needed a home for OYB. The space contains not only the storefront bookstore and a kitchen and bathroom, but it also houses the new media lab for OYB.

"We will have a working media studio here," Benally said during one of the work sessions. "We will be making video presentations here as well, and hope to install a large screen to view films in the making-and also to share with the community."

The "Freaks of the Peaks" haunted house fundraiser operated throughout the pre-Halloween weekend, illustrating their own personal vision of an environmentally poisoned world.

The space is tentatively scheduled to be open Tuesday through Friday from 4 to 8 p.m., on Friday and Saturday from 2 to 8 p.m., and from noon to 6 p.m. on Sunday. There are plans to establish a movie night every Tuesday, and Benally will be holding an OYB media training on November 24-25.