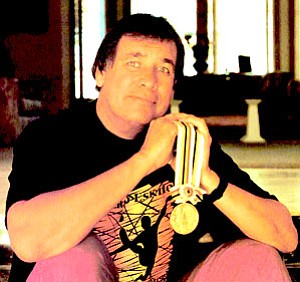 FLAGSTAFF-Inspiration, endurance, persistence and determination: these are just a few of the qualities that stand out in the life and legacy of Olympic medalist and runner Billy Mills. Fortunate for many northern Arizona running enthusiasts and residents, Mills will be in Flagstaff to present a free presentation at 7 p.m., Tuesday, Nov. 13, in the Prochnow Auditorium on the Northern Arizona University (NAU) campus.

Mills, Oglala Lakota, will share his story of persistence as the only American to win a gold medal in the 10,000-meter race in the 1964 Tokyo Olympic Games, as well as his journey of overcoming prejudice and alienation.

The event is being coordinated by the NAU Martin Springer Institute, which in 2006 hosted Paul Rusesabagina whose efforts provided refuge for 1,268 people during the 1994 Rwandan genocide.

Since then Rusesabagina has been speaking out about the genocide in Rwanda and other African nations, while privately donating aid to organizations helping the victims. His 2006 NAU presentation was sold out and even packed an additional Cline Library auditorium where attendees viewed the discussion simultaneously through a television broadcast.

This year, to fulfill the institute's goal of focusing on sports and tolerance, Mills was invited.

"Our mission is to promote moral courage, altruism and tolerance and this year all of our events also focus on sports and tolerance. Due to our local population, Gretchen McAllister, our department director, decided [Mills] would be the best guest," Melissa Cohen of the Martin Springer Institute said.

A special luncheon will also be offered to two special students from each school during which Mills, elite runner Alvina Begay, Diné, and elite runner Brandon Leslie, Diné, will be present.

Both Begay and Leslie are Olympic hopefuls.

Begay, 27, is from Ganado and qualified for the 2008 U.S. Olympic Team Trials-Women's Marathon in her first attempt at the distance at the 2006 Twin Cities Marathon.

Begay competed for Adams State College as a freshman, and was a member of their 1999 NCAA Division II national championship team in cross country. Upon transferring to Arizona State University (ASU) she ran the eighth fastest 10,000-meter in school history. Since graduating in 2004, Begay has excelled at the half marathon distance, twice placing in the top 10 at the U.S. championships, most recently in January 2007 when she posted a personal record of 1:12:57. Begay received her B.S in nutrition from ASU in 2004. She is involved with Wings of America, a summer running camp for Native American youth.

Mills was born on the Pine Ridge reservation in South Dakota and attended an Indian boarding school. Through his experiences in the Marine Corps and college, Mills gained a strong sense of self-worth that prepared him for the Olympics.

"Mr. Mills serves as an inspiration to us as he achieved such success while overcoming racism and trying to find his place between two very different worlds," McAllister said. "He stands as a 'compassionate warrior' as he fights against discrimination and poverty among Native Americans."

Mills believes that the Olympics can stand as an important vehicle for promoting peace.

"What I took away from the Olympics wasn't a gold medal,' Mills said. "I took away an understanding of the dignity and character of global diversity. That's the power of the games, and it's the only platform of its kind."

In recognition of his humanitarian work and his Olympic accomplishment, Mills has received five honorary doctorate degrees and had a film, "Running Brave," was made about his life. The movie culminates with the 1964 Olympic win, which is still considered one of the most stunning victories in American Olympic track and field history.

Mill's visit coincides with the opening of the Nazi Olympic exhibit that shares the story of the 1936 Olympics.

For more information, please visit nau.edu/msi or call(928) 523-2464. This event is sponsored by the High Altitude Sports Center, College of Arts and Letters, the Martin-Springer Institute and the NAU Student Activities and Unions.

Tickets to hear Billy Mills are free and available by visiting the NAU Central Ticket Office in the University Union or by calling (928) 523-5661.

The Martin-Springer Institute will highlight the Olympics of 1936 with their Nazi Olympic Exhibit, available for viewing on the third floor of the Riles building on the NAU campus, will be open from Nov. 14-Dec. 21 and again in the School of Communication gallery from Dec. 17- Jan. 30.

"The Olympics have provided us with an opportunity to look at issues of tolerance and intolerance throughout the years," McAllister said. "We would like to provide examples of people who have been able to overcome intolerance."

Groups from middle school, high school and college are invited to schedule a 35-40 minute docent-led tour through the exhibit that will encourage thoughtful conversation.

Curricular materials are available on the MSI website at www4.nau.edu/msi/. Tours can be scheduled with Melissa Cohen at Melissa.Cohen@nau.edu.