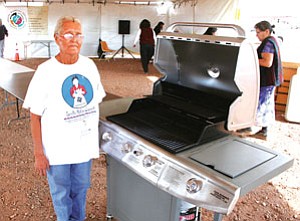 "We are all very pleased with the turnout for our first annual chili cook-off here in Luepp," Serena Holgate, NNSDP nutritionist, said. "The contestants were great, the judges all did an outstanding job, and the people from the surrounding communities turned out for the event to watch. There were people there all day supporting the contestants and it was unique to see the participation by everyone who came out for the day."

The morning began with registration of the contestants followed by orientation of the judges by Selena Holgate and Margilene Barney. Invocation was given by Brenda Thompson, which was followed by the introduction of guests by Normanda Nez. Holgate then provided information about the purpose of the chili cook-off.

The keynote address was given by NNSDP program supervisor Robert Nakai from Window Rock.

Nakai provided updated information regarding the work of the NNSDP and progress the project is making in its battle with diabetes among the Navajo people.

"We are constantly working everyday in trying to make a difference in the lives of our people throughout the Navajo Nation and trying to stop and prevent the growth of diabetes," Nakai said. "We have our staff out in the communities going from door to door, they are at chapters, senior centers, schools and wherever they can to spread the message to better health such as major fairs and local events such as this chili cook-off."

While the contestants were cooking, different presenters talked to the spectators about healthy lifestyles, proper hygiene while cooking, Halloween safety, the importance of fiber, the food-guide pyramid and serving sizes. Door prizes were also given away to many people who attended the event.

When the sun was setting low and the cool western breeze began to come through the community, people slowly drifted away warmed by the experience of the day with the taste of chili still lingering on their tongues.

Holgate said that this was such a unique experience that she is already looking forward to hosting another event next year for the community.