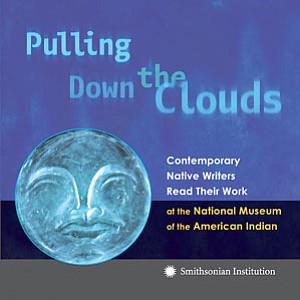 WASHINGTON, D.C.-"Pulling Down the Clouds: Contemporary Native Writers Read Their Work at the National Museum of the American Indian" is now available.

American Indians have always used expressive, richly detailed stories, speeches and songs to pass their cultures to the next generation, and oral traditions remain a source of Native cultural strength throughout the Americas. In the readings, which were recorded at the museum, some of the most engaging and provocative Native writers working today celebrate their communities' languages, poetry and stories that also speak to contemporary Native realities.

"At the museum, we have always placed central importance on privileging 'the Native voice' in the way we present our programs and exhibitions," said founding director W. Richard West Jr. "I am confident that the roster of poets and fiction writers you hear on this recording ... will give new meaning to that term."

Alternately funny and moving, angry and contemplative, the recorded readings confront and comment on the Native American experience-including relocation, loss of language and community survival-as well as universal themes of love, death and family bonds.

Together, they provide a wealth of Native voices that blend with and shape the literary traditions from which they arise.

Co-produced by the museum's Publications and Cultural Arts departments, "Pulling Down the Clouds: Contemporary Native Writers Read Their Work at the National Museum of the American Indian" is available as a 70-minute audio CD for $15. (Smithsonian and NMAI members receive a discount.)