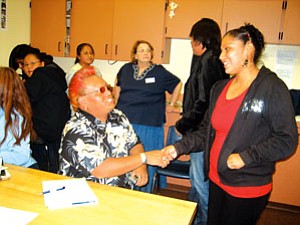 The Alamo Community School entourage watched the Hopi High Teen Show on Thursday and visited with the Hopi High journalism students on Friday.

The Hopi High Teen Show is a live remote from the radio room at Hopi High where Hopi High radio students interview other students, teachers, coaches, administrators and community members.

Davis Maho served as the program manager for the show.

The school is located four hours from Hopi High School on the Navajo Nation in New Mexico.

"It was cool being on the radio," Apachito said about her interview.

Eddy said Apachito was obviously nervous about being on the radio as she constantly looked at Jade for cues.

"She was scared," Eddy said about Apachito.

Eddy said her students are afraid of going on the air and hopes to get them over that shyness.

Apachito said radio can be used to help tribes retain their language and culture. She said most students will listen to the radio if they talk about subjects that teens want to talk about.

Apachito said Alamo Community School is a lot smaller than Hopi High School. The school is for kindergarten through 12th graders. The school offers some after-school activities, but she wishes that they offered more.

Apachito said 95 percent of the students at her school speak Navajo. She said the school is more remote than Hopi as they have to travel 30 miles to get food and 60 miles to purchase clothing.

Eddy added that teachers have to travel 30 miles to get to the post office.

The Hopi High School radio class is raising funds to attend the National Federation of Community Broadcasters Conference in Atlanta, Georgia, in March.