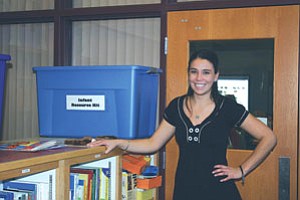 FLAGSTAFF - In customary form, the Alliance for Children's Early Success (ACES) members convened for their monthly meeting in celebratory fashion. The group had much to be happy about beginning with the opening of the Early Childhood Lending Library. The library, which was developed and financed by ACES, Northern Arizona University College of Education, the U.S. Department of Health and Human Services and United Way Success by Six, is located in the NAU Curriculum Lab in the Eastburn Education Building. The library began operation Sept. 26 with a grand opening reception which reportedly drew crowds of early childhood education enthusiasts.

"I was wowed by it," ACES chair Julianne Hartzell said. "It was nice to walk in and have a personal escort. There were a lot of people there and it's for the community-so get over there and use it."

The Early Childhood Lending Library is open to anyone from the region interested in using the voluminous selection of materials. The library includes games and hands-on activities, as well as multimedia resources and texts detailing teaching, administration, development, multicultural education, Montessori, Waldorf, reading, writing, math, social studies, art and more.

"There is a lot of great stuff over there," said librarian and education major Jennifer Wermes. "It's the only part of our lab that's open to the public and students have been using it like crazy especially in their early childhood practicums," she said.

The next reason to celebrate for ACES members came in regard to the Arizona First Things First (FTF) Board using the ACES guidelines to determine regional council members. FTF and ACES member Pam Powell, assistant professor of early childhood education at NAU, reported that the most recent FTF meeting included a discussion of the regional boundaries determining how state funds will be allocated.

According to Powell, members are currently weighing the benefits and disadvantages of designating regions by county.

Powell explained that Coconino County is so large, that including the entire county in one region would be difficult.

"This is a communal effort to make sure children have the care they need. Coconino County has the most space, the most communities and the most tribes of any county," Powell said.

Therefore, she explained, the diversity of issues are too great to include in one region. She also urged ACES meeting attendees to visit the Web site to include their opinions of the boundaries.

"The people here represent remote regions and your ideas need to be considered. So, please go to the Web site and make your concerns heard," she said.

To learn more about this initiative visit

Greiselle Apodaca, ACES member and facilitator, then took the lead by commending the group members for their successes and encouraging them to look deeply at their work as they are laying the groundwork for other early childhood educators and advocates around the world.

Apodaca detailed the elements which need to be included to assure that all needs of children ages 0-8 are met. She said leadership development, collaboration and applied research were key to this process. In reference to applied research she said, "This is the piece I'm concerned about. I'm afraid that you're going to get so involved in the doing that you're just going to do the little things. You need to get more involved in the evaluating-to mark what works and what doesn't work. You need to be concerned about documenting and developing a replication guide for Kindercamp so when it is used again it is not redefined-so that whoever takes this and uses this model interprets it correctly."

Apodaca said that ACES members need also to be politically involved and motivated.

"This is what is going to get you to that 'boundless potential honored,'" she said. "System reform doesn't work. If you want seamless services to surround children sot that their potential is reached, you are going to have to affect institutions that love, hug and nurture children. You have to ask, 'Did you go to the school board meetings? Did you push the envelope?' If you're not politically active, you're going to have all these institutions serving children, but there are going to be gaps."

She said that ACES members must understand each of these pieces and how they interlock. Only then will their ultimate goals of insuring that for all children age 0-8, affordable healthcare and childcare are available and all resources are accessible for these children and their families be met.

"You guys are basically writing the books," Apodaca said. "The point is that these children are served and they receive the services they need."

For more information about ACES call (928) 773-9813. The next ACES meeting will be held from 3-5 p.m., Nov. 7, at the Head Start Sunnyside Training Facility, 1825 N. Main St. ACES is open to all members of the early childhood community throughout Coconino County.