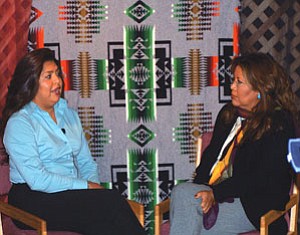 FLAGSTAFF-Northern Arizona is a unique place and so, special things happen here. One of these phenomena might be considered Flag News at Noon, an online news program, which includes only positive news. On Oct. 11, Flag News at Noon added a new segment to its lineup for the very first time.

This piece entitled "Native American News from Northern Arizona" hosted by Jamescita Peshlakai will now be included each week in respect of the original peoples of this region who continue to bless the land and communities with their presence.

"It's all good news," Peshlakai explained. "Each week I'll have special guests-we'll do stories on the elderly, scholarships, but no controversial stuff-basically, news that people don't hear."

"In 2005 we met the Department of Labor Women's Bureau director over at NAU [Northern Arizona University] and she asked us about issues affecting Native women in Flagstaff and rural areas," Figueroa remembered.

Following this discussion, Peshlakai, who at the time was employed as DOL Workforce Investment Act director at Native Americans for Community Action, and Figueroa set off to establish the Wi$e Up Financial Literacy program. During the first Wi$e Up series, eight women (and families) enrolled.

"It was very moving, very powerful to actually be able to teach someone about the different terminologies ... in the financial world," Figueroa said.

"It's never too late," Peshlakai commented.

"No, no, it's never too late," Figueroa agreed. "That's our motto this year. And now we're hittin' the road. We're going to take financial literacy to some of the tribes and tribal reservations."

Following the show, Peshlakai shared her enthusiasm for Flag News at Noon and how her involvement with the show began.

"I've watched the show and it's really good," she said. "You never see anything on the positive aspects of Natives in main stream media. I think people are so hooked on stereotypes-it's kind of like the elephant in the living room, you know? We're hoping this will help to change that."

In the future, Peshlakai plans to invite Amanda Morris of the NACA health and diabetes programs, representatives from the new Kinlani high school dormitories at Flagstaff High School, and Shelby Rae, a local Youth at the Peaks activist and writer.

"She's really amazing," Peshlakai said of Rae. "I read a poem she wrote called 'Being Brown in this Town,' that was really just amazing. I mean, we all have experiences with being a teenager and her perspective with all the issues floating around is really great."

The show's producer and director, Tyrus Coursey of Koshari.tv, initiated Flag News at Noon in August of 2006 with a multitude of reasons fueling his mission. Coursey hopes to promote the positive aspects of Flagstaff by highlighting the multitude of cultures in the area.

"I think it should be a community thing. Since I first got the idea to do this I wanted to involve everyone and have it be less Hollywood and more just who we are-a good news show that reflects the nature of this place and this time," Coursey said.

Coursey explained that 80 percent of popular media involves some form of tragedy or conflict. The producers of this type of sensational, pessimistic news attribute to the promotion of the negative aspects of society in general.

When this type of news is compared to reality-and more specifically, the true essence of northern Arizona-popular media is not representative of our life.

"At the end of the day there's a lot of divinity out there," he said.

Incorporating Native American News from Northern Arizona into Flag News at Noon is one way to illustrate the beauty of the region contributed by Native cultures.

"The contributions to this culture of Indigenous people is so great that it is significant to have a voice from there," Coursey said.

In fact, Peshlakai, Coursey, Figueroa and other integral developers discussed the possibility of entitling the Native segment "Hozhoni," the Diné conception of a completed circle of harmony. This word is taken from the word Hozho and Walking in Beauty. However, the group decided against the term in order to be inclusive of all Native peoples living in the region.

"We wanted to be as ecumenical as possible," Coursey said.

In addition to affirming the positive aspects of our community, the producers are driven by the need to record this reality of optimism for the present generation as well as the future. Coursey said that video production and viewing is enormously influential.

"We live in a period of time where the moving picture is how we learn to behave and who we are; movies can really spell out who we are," he said.

Thus, by representing the positive, those involved with Flag News at Noon hope to create positive.

"I'm like a media evangelist," Coursey said. "... because so much of life that we have goes unrecorded."

Coursey and Peshlakai discussed their opinion that true cultural understanding of Native cultures and peoples does not exist.

"There are a lot of misconceptions based incidental meetings in the grocery store and roadside ramadas," Coursey said.

He explained that these interactions create misunderstandings in each individual involved.

"It goes both ways, because there's an ignorance in all of us. I want to be out there doing what I can to dispel ignorance and help educate on both sides of this cultural exchange," Coursey said. "Our core mission is to provide for a lack of accessibility to media for different voices in our community. We want to present news relevant culturally, socially and economically to our community-to develop a content that's meaningful."

As the conversation ended, it became obvious that community and culture were not divided in the minds of Flag News at Noon producers; they were one.

"In the future, we want this to be public access for the community. We all live here. We do this for our culture, for ourselves. There is no separation of cultures. These are my neighbors," Coursey said. "That's what's going to be there [in the future]-the legacy of this thing. To save it for the future, a chronology for the future to say, 'this is us.'"

Flag News at Noon is funded solely by Coursey and supported in various ways by volunteers. The Weatherford Hotel offers a modest facility for the production of the show each Thursday night. The show is accessable online at www.flgnews.com, where each broadcast is also archived and available. It can also be seen on Northern Arizona University's cable station 59 at 7:30 p.m., Friday, Sunday, Monday and Wednesday.