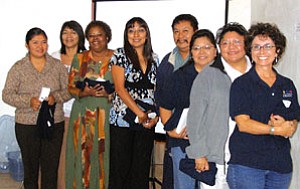 HOTEVILLA-On Oct. 5 during their annual meeting held at the Hotevilla Youth/Elderly Center, the Hopi Education Endowment Fund (HEEF) discussed various areas of business, which included the past year's fundraising activities, committee reports and funding to various programs. However, the highlight of the day was the welcoming of five new members to the HEEF board, one new member to the HEEF Executive Committee and the renewals of eight previous members.

In addition to welcoming the new members, the HEEF also honored outgoing founding members Barbara Poley and Emory Sekaquaptewa for their dedication, service and commitment to the HEEF. Although unable to be in attendance, Sekaquaptewa shared these reflections of his time with HEEF: "I felt it was by chance that I was recommended to be a part of the first board. It was a time in my life when I had many commitments and could not travel to and from Hopi as frequently, but felt that being a part of the HEEF board would be an important role and one where I could impress the importance of investing in our most promising students. I strongly believe that guiding our students toward careers in research, teaching and language preservation would enable our communities to realize true self-determination. This is an important task that still needs to be continued."

Poley shared her memories of the initial creation of the HEEF to where it has grown. She went on to state that although she is no longer a formal member of the fund that she will always be there to provide support and encouragement. HEEF executive director LuAnn Leonard stated, "As founding members, Mrs. Poley and Mr. Sekaquaptewa's efforts and work have been integral to the success of the HEEF. Their leadership has been invaluable and we thank them for their commitment to the HEEF."

With the HEEF welcoming of new members, the HEEF board and staff are now looking forward to building upon the past year's accomplishments as they plan to continue and implement new fundraising activities. HEEF Marketing/Special Events manager Sam Tenakhongva stated, "Currently we are running our Alumni Challenge campaign through Oct. 19. The Challenge is a friendly competition between the three state alumni groups and a group comprised of out?of?state and junior/community colleges to see which alumni group can pledge the most amount of funds in the name of their alma mater, and new to this year's challenge is the ability of alumni to pledge on behalf of their high school alma mater as well."

Tenakhongva added that the HEEF has begun preparations for their 5th Annual Silent Auction to be held Feb 29 at the Hilton Garden Inn in Phoenix. The event will feature a one-of-a?kind piece donated by renowned Hopi artist Clark Tenakhongva and family.

Leonard said, "With our current and upcoming fundraising activities, I invite the public to join us and support our efforts and consider donating their artwork or volunteering for the silent auction, or pledging for the Alumni Challenge."

The HEEF is a Hopi Tribal government non-profit program qualified under section 7871 (a) of the Internal Revenue Service Code. All contributions to the HEEF are tax deductible. For more information on the HEEF the Alumni Challenge, or Silent Auction please contact the HEEF at heef@hopieducationfund.org, call (928) 734-2275 or visit their Web site at www.hopieducationfund.org.