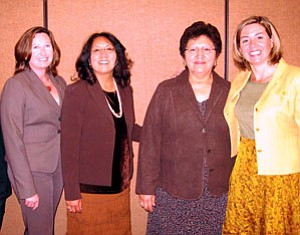 "I'm happy to accept the appointment to represent the Navajo Nation at the national level," Shirley said. "Our collaborative voice is needed to address violence against women in Indian Country. I will do my part to serve and help promote justice."

Title IX of the Violence Against Women Act of 2005 requires the National Institute of Justice to conduct a national baseline research study on violence against Native American women.

The study will include examining domestic violence, dating violence, sexual assault, stalking and murder. It will evaluate the effectiveness of the federal, state and tribal response to violence against Indian women, and will propose recommendations to improve the government response.

A report on the study's findings and recommendations will be submitted to the Senate Committee on Indian Affairs, and to the House and Senate Judiciary Committees.

The task force was established to assist with development of the study and the implementation of its recommendations.

The first lady also announced that the Navajo Nation received a $398,000 grant from the Office on Violence Against Women to encourage that domestic violence, sexual assault, dating violence and stalking be treated as serious violations of criminal law.