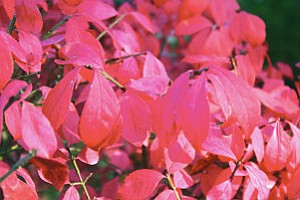 GRAND CANYON-The changing of the seasons is occurring on the North Rim of Grand Canyon National Park as autumn colors begin to emerge.

As colors on the North Rim change, it is a reminder that the North Rim's visitor season is winding down. The National Park Service's (NPS) North Rim Visitor Center closed Oct. 16. A limited number of campsites with limited services, such as portable toilets, are now available on a first-come, first-serve basis until snow closes Highway 67.

Hikers and cross-country skiers will be permitted to use the park's group campsites throughout the winter months if they have obtained a permit through the Park's South Rim Backcountry Information Center or by going to the Visitor Center at Pipe Springs National Monument. The South Rim Backcountry Information Center is open year-round and can be reached by calling (928) 638-7875, Monday through Friday, from 1 to 5 p.m. MST. Permit requests can be faxed year-round to (928) 638-2125. Permits are not considered earlier than the first of the month, four months prior to the proposed start date.

Reservations for the Grand Canyon Lodge are no longer being accepted. All other concessioner-related visitor services, except for limited food service, closed Oct. 15. The final day for mule rides on the North Rim was Oct. 15.

Arizona Department of Transportation officials will try to keep Highway 67 open through the end of November, but a major storm with heavy snowfall could close the road earlier. After Nov. 1, visitors are encouraged to call the NPS, North Rim at (928) 638-7870 in advance of their trip to check on the status of Highway 67.

Until final closure of State Highway 67, only emergency services will be provided by the NPS, and visitors are reminded to pay special attention to their gas gauge, since gas will no longer be available in the park. Gas and diesel fuel will be available five miles north of the park at the Country Store through early November. Jacob Lake Inn, restaurant and gas station, located 45 miles from the North Rim developed area, remains open year-round.