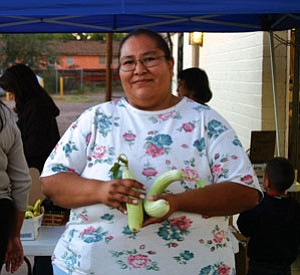 TUBA CITY-As the seasons change so too do our emotions, but the feelings of happiness and being content are ones that are sure to be held all year long by the growers of the Tuba City community gardens on the grounds of the St. Jude Food Bank.

The growing season closed in a way Sept. 26 as the last farmer's market was held, but the memories of the tantalizing produce are ones that will without a doubt bring happiness through those cold months until planting outdoors is possible once again.

Orange cherry tomatoes, red and yellow slicing tomatoes, bite-sized and Armenian cucumbers, purple eggplant, pickles, traditional tea, a selection of peppers that could color a rainbow and more were offered for sale and for health.

Behind the warehouse at the food bank, even more delectable crops were visible, but not for sale. These were saved for the tongues and spirits of the growers-seven families in total-who grew crops to satisfy their dreams and desires.

Roland, Kelly and Veronica Becenti grew award-winning watermelons this summer, which earned the family ribbons at the Coconino County Fair. The opportunity to garden was the first for the family, but, according to this mother and her children, only the beginning.

"We really enjoyed it," Veronica said. "We'd come out every other night to check on it and to water. It was nice to spend time together." She said her children are excited to try new crops next year and have already begun to dream about what they will plant.

"I think we'll try corn next year. We had so much fun with all this, I think we'll definitely do it next year," she said. "Now he's been saving seeds from grapes, peaches and the rare, occasional seedless watermelon seed."

Sister Frances Vista, executive director of the St. Jude Food Bank and coordinator of the farmer's market explained that the market has been in operation for two seasons. In addition to the harvest from the community gardens, local growers are invited to bring their personal produce to sell at the market.

"The whole idea is to bring awareness about health and to encourage people to eat fresh fruits and vegetables," Sister Frances said. "We're modeling for local growers. A lot of people sell at the flea market and having [the farmer's market] on another day gives them another opportunity to sell their crops."

Sister Frances also travels to Flagstaff every Sunday to pick up regionally grown vegetables contributed by Whipstone Organic Farm in Paulden, and supplemental fruits purchased at the Flagstaff Farmer's Market.

She also supports the sale of traditional, natural tea grown by a local Diné woman.

"I have a customer who brings the tea from Tonalea," Sister Frances said. "She has fields of it. So she brings it in and we sell it for her here."

In addition to Sister Frances, several other individuals from the community volunteer to work at the market each week. The group enjoys the event so much that they hope to become a certified organic farmer's market next season. With this designation, they hope to attract more local farmers.

They will also be able to accept Electronic Benefit Transfer (EBT) and food stamp payments.

"I did not want to get into that right away. Our focus is to support the farmers-the local ways, the traditional way. That's why I don't want to mark our prices up," Sister Frances said.

To wit, most crops were sold this summer for $1 per basket and even specialty items such as the Armenian cucumbers, were sold for 50 cents apiece.

Grower Marie Humetewa said she was inspired to grow vegetables by her father.

"My dad used to farm. He grew down at Moencopi behind Van's Trading Post," Humetewa remembered.

She said she chose to grow Armenian cucumbers based upon her fond memories and plans to continue growing in the community garden for years to come.