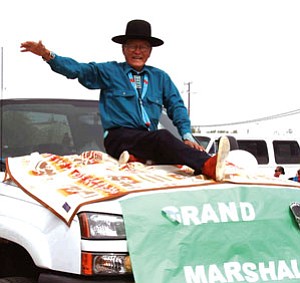 The honor is given to someone who has shown loyalty, support and genuine concern and interest in the welfare and positive educational productivity of students that attend any of the seven Tuba City District schools.

There have been individuals in the past-Native and non-Native-in addition to a few reservation area "couples" that have been given this distinct honor.

This year, the honor of serving as the Tuba City homecoming parade grand marshal went to Norris Nez.

Nez is a 78 years "young" member of the Navajo Nation from the Mexican Clan born for Towering House Clan. He has been interested and supportive of Tuba City High sports, particularly basketball, for many, many years along with his wife, Lena.

Nez and his wife have followed the Warriors down to America West Arena each time they have made it to the state finals. He loves to sit in the second row near the court and cheers the Warriors on, supporting them whether they win or lose.

Alhough Coalmine Mesa is his hometown, Nez has been deeply involved in Tuba City and its school environment because he has had eight of his own children and now 13 of his current grandchildren attending TC District schools.

Nez is also a renowned medicine man, certified through the Navajo Medicine Men's Association to perform both the Yei Bi Chei and Squaw Dance ceremonies.

Nez also has two daughters who work for the Tuba City District. Loretta Saganito and Susie Robbins are teachers with the District, and he is also the brother-in-law to TC Junior High principal Lee Tsingine through his wife, Mae.

"I know the importance of education and have stressed the value of education to my children and grandchildren. One of my daughters and five of my grandchildren have received the Chief Manuelito [Scholarship] Award from the Navajo Tribe because of [the] high quality education they received at Tuba City District. My grandson, Lawrence Nez, was salutatorian of his graduating class ... in 2002. I am proud and honored to have been picked for this year's Warrior parade grand marshal."

Nez has also been actively involved with the "Save the Peaks" campaign.