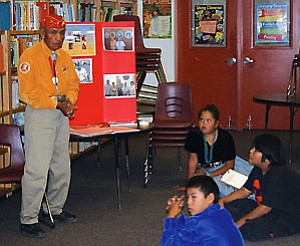 LEUPP-Through the final week of September, Leupp Elementary School staff, students, families and friends celebrated the Native culture giving life to the community. Each day during the Native American week, special activities were planned in order to commemorate the elements of Diné culture that guide the lives of the elementary school children.

Leupp school music teacher and Native American Week event organizer Nancy Hartgrove explained that the events have been taking place for many years.

"Different presenters come throughout the week to teach our students traditional Navajo trades and crafts," Hartgrove said. "To schedule the presenters, we looked at the needs around the community."

The week began with the traditional custom of running toward the sun with a fun run. Later in the day, Nina Tohannie of the Winslow Indian Health Care Center discussed the importance of self-esteem and taught the students to be proud of their culture as well as their individuality.

On the second day, health and safety were the themes of the day as the humane society workers and firefighters visited. Children also learned about the importance of wearing a seatbelt or riding in a car seat and maintaining a healthy diet.

On day three, students dressed in their traditional best and elders from the community were invited to eat lunch and share their lives.

Emma Smallcanyon, a Diné weaver, who began learning these skills early in life, shared her talents with students as her words were interpreted.

She began her presentation by introducing herself and naming her clans.

The interpreter asked the children, "Did you understand Mrs. Smallcanyon when she said her clans?"

The children answered immediately and in unison, "Yeeeessssss," and they leaned in to make sure they heard every word and saw her every movement.

"Each year around May I go out and cut some of the wool off the sheep, then I shake it so some of the dirt comes off," Smallcanyon explained.

She then showed the wide-eyed children the types of materials she uses to dye the wool including wild tea which makes a light brown, a walnut which makes a dark brown and light colored sand to make a bright white.

Smallcanyon demonstrated how to card the wool as well as the how to spin properly. When she raised one of her small rugs the children gasped at its beauty and a few shared their hope to someday learn to weave.

George Smallcanyon, a World War II Code Talker shared his life as well as his experiences and those of his comrades during duty. Born in Sawmill, Smallcanyon attended high school in Ft. Wingate, N.M. At age 17 he enlisted in the service and was trained as a code talker. His daughter and Leupp schoolteacher Annabel Smallcanyon described his duty on five separate islands and his recent recognition in Washington, D.C.

She explained that her father never spoke about his service and thus she had no knowledge of his code talker status until her son began learning about family veterans as a school project.

"So all the time I was growing up, he never said anything," she said. "He wasn't supposed to talk about it."

Following these presentations, Leupp school students shared their thoughts about the day's events.

"Yes, I do too," Corey Monroe, who is also in grade seven, said. "I learn from my grandparents. They talk to I and we say it back to them."

Both students said they are very proud of their culture and would like to learn more in school about traditional ways.

Rebecca Williams, a kindergarten student, said she prefers dressing in her traditional clothing much more than contemporary wear, and would like to wear this type of clothing every day.