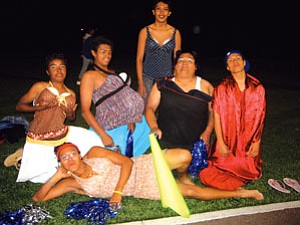 Nevakuku, a 17-year-old senior, said she was happy to win the crown, but she didn't expect to win.

"I don't usually do this kind of stuff," she said.

Nevakuku said she thanks the students who voted for her. She is active in the American Indian Science and Engineering Society and plays for the softball team at Hopi High.

She wants to major in athletic training in college, but hasn't decided which college she wants to attend.

Baker, also a 17-year-old senior, said he was excited about winning the king's crown.

"I'm going to take the crown with me to the Doug Conley cross country meet," he said.

Baker said his message to his fellow students is for them to keep up the good work until graduation day.

Baker runs for the cross country and track teams at Hopi High. He also plays basketball for the Bruins. He maintains an A/B average. He wants to major in construction in college, but doesn't know where he wants to go.

He is the son of Debra and Rick "The Legend" Baker in Sipaulovi.

It was a big week for the juniors as they beat the seniors in the powder puff game and won the hall decorating contest with a Las Vegas theme.

Unfortunately, however, after a hard-fought game, the Bruins lost to the Rough Rock Sun Devils with a score of 48-30.