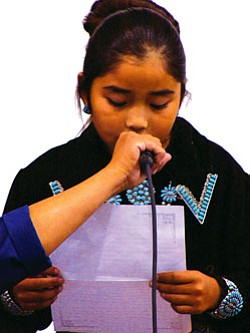 Nizhoni Alice Young shares traditions including the use of corn pollen and the sacredness of horses (Photo by S.J. Wilson/Observer).

FT. WINGATE, N.M.-Students and teachers got to know a whole lot more about each other thanks to the completion of lessons in identity awareness. Grace Benally, an education specialist at Wingate Elementary, led close to 40 students and teachers and answered the question, "Who Am I?"

Spirited students in kindergarten through eighth grade, parents, teachers, and special guests attended the celebration. Common themes were presented, highlighted by some rather surprising revelations.

Seventh grader Chelsea Ortega recognized her Hispanic ancestry as well as her brother-who she described as naughty-and an aunt who is more like a sister to her.

"I am trying to learn Navajo," Ortega said. "My grandparents read to me in Navajo."

Kindergartener Emily Woody described herself through a series of drawings. Her teacher, Koreen Begay, helped little ones explore the question of who they are through an exercise called Honey, Peanut Butter and Cocoa.

"We are all alike," Begay said, meaning that in describing a Navajo person, one usually hears the same thing-black hair, brown eyes and skin. "My students observed one another ... and compared their skin, hair and eyes with honey, peanut butter and cocoa," she said.

Woody charmed the audience, speaking in her tiny voice.

"My hair is cocoa, my eye is honey, my skin is peanut butter," Woody carefully enunciated.

Teacher Jamie Begay shared a discussion with student Ethan Sherman about his drawing-featuring Ethan and his grandparents carrying in wood.

"When I asked Ethan where he and his grandparents got the wood, Ethan said, 'Duh, teacher, we don't get wood at Wal-Mart.' He explained that his grandfather chops the wood [and] his grandmother cooks with the wood," Begay said. "As children you don't realize that the best memories you will have is of time spent with your grandparents."

First grader Aja Smith read a book about a baby eagle and his dislike of the food provided by his parents.

Galveston Nelson talked about helping to butcher a cow, and that he wants to be a policeman.

Second grader Erin Lewis admitted that she liked her family, and that she is glad to be herself.

"I have four sisters and two brothers. We have a house we live in," Lewis said. "I like my dad. He helps me with my homework. I like my family."

Daniel Belone spoke of having Navajo pride in his family who makes and sells jewelry.

"I am named Alice for my grandmother," Young said. "My grandfather is old but strong. My father taught me that horses are part of our culture, and are sacred."

Liseanne Yazzie spoke about the traditions of her Oglala ancestry, as well as her father's position in the Native American Church.

"My father is Road Man. A Road Man is the leader of his family. My Lakota Tribe is separated into bands-they are horse people. When I am older I will learn about the sweat lodge from my mother," Yazzie said.

"What makes me Navajo is what I do with my family," sixth-grader Michael Clark explained.

"Act the best way you can around medicine men. Do your best at all times. When you are in traditional dress, don't run around, especially if you are a young woman," Shelby said.

"Be wise, polite and respectful-so behave yourself," she added.

Chelsea Ortega said that she was just herself, and that she liked to be alone.

"I'm a girl who likes to dress like a boy-that's just me."

She loves to run, listen to hip hop music, horseback riding and swimming.

"If anyone wants to know what it means to be a Navajo, they can come out and spend two days with me," Lorraine Kahn said.

She described herself as all-Navajo because she has four clans, but said that through family stories she believes there is Mexican blood in her background-as well as a White Mountain Apache woman who was adopted into the tribe as a child. She later married Kahn's grandfather.

"Sometimes we have no choice in our background," Kahn told her students.

Explaining that she did not speak fluent Navajo as a child, Kahn remembered asking her great grandmother about her experiences at Hweeldi.

"I didn't know why she turned away from me," Kahn said. "At the time I thought it was because she was ashamed that I didn't speak Navajo. But I later I realized that she turned away to hide her tears-she had memories of being marched and being so hurt for four years. She saw her mother and father killed, and her baby sister sold."

These memories molded Kahn's great grandmother, leading her to have no trust in anyone non-Navajo, Kahn explained.

"She told us never to marry anyone non-Navajo," Kahn said. "She told us to remember our clans and prayers, and to always have sheep. Our ancestors gave us the chance to continue our culture."

Eleanor Duffy said that her mother defined who she became.

"I am proud to have a mother who guided me on how to be a woman and a teacher," Duffy said. "I truly believe that our parents are our first teachers. I am proud to communicate in Navajo both verbally and in writing."

Charles Henderson recounted memories of his grandparents and a simpler lifestyle. But he also remembers important historical events that continue to mold Navajo history today.

"I learned a lot of Navajo by listening to people talking," Henderson said. "They talked about John Collier and stock reduction-he was one of those who thought Navajos would have a better life living the white way-but he never changed my grandfather."

Charles Sherman, who teaches math and science, told students that he was named after his grandfather, Charlie.

"I am a husband, father and grandfather," Sherman said. "I am a learner, which makes me a teacher. I am still on the journey, proud of who I am and what I will become. I am who I am today and tomorrow hopefully I will be a better person."

He also confessed to liking mutton, the feel of fat on the roof of his mouth and lots of salt in his blue corn mush-washed down with diet soda or hot coffee.

Jenny Lee said that she admired her mother as a keeper of tradition-her father was a medicine man. Now that her mother has gotten older, she teaches Lee patience.

"I have learned to listen carefully, and to ask questions only-and I mean only-if they are important," Lee said.

Her description of her own formal education was painful for some to hear.

"I attended school at Ft. Wingate," Lee said. "We were not allowed to speak Navajo. Ft. Wingate of course was once an Army camp. I don't remember how I learned English, nor do I remember a single positive learning experience."

Lee later became a dorm aide, and was grateful to see improvement, and as a teacher she worries about the Navajo language.

"We are slowly losing our Navajo language-and that is our uniqueness."

The assembly marked the completion of the VOICES Literature curriculum's Theme I: Identity Awareness. VOICES tells the stories of people of color and culture, and features high standards, leading with literacy and character education, while preventing violence and substance abuse.