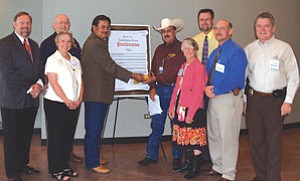 SNOWFLAKE-Community leaders and citizens gathered at the Northeastern Arizona Summit Against Drug Abuse Sept. 5 to explore barriers and solutions to drug problems in various communities in the region. The summit was hosted by the town of Pinetop-Lakeside and organized by Navajo County Coalition Against Drug Abuse.

The 122 registered participants broke into groups by communities-Pinetop-Lakeside, Show Low, Snowflake, Round Valley, Apache County, northern Navajo County, White Mountain Apache Tribe and Heber-Overgaard-to methodically analyze their community problems, barriers and solution. By the end of the day, each group had five solid solutions to take home and to implement through mini-coalitions in their hometowns.

The event opened with officials signing a proclamation for National Alcohol and Drug Addiction Recovery Month. Navajo County Presiding Judge Dale Nielson opened the summit, noting that more than half the cases he handles in court directly involve methamphetamine. He called educating the public the real way to handle this serious problem.

Apache County Presiding Judge Donna Grimsley spoke, noting that her county is so interconnected with Navajo County that its citizens shop here, get health care here and "even buy [their] drugs here," referring to illicit drug purchases.

As host, Pinetop-Lakeside Councilman Dave Clark, who initiated the idea of a regional summit asked participants to take solutions back to their community. "It's going to take the entire community standing up and saying, 'We're not going to take it any more.' We need to form a foundation to do things to make it happen."