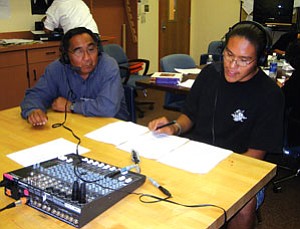 During the teen show, students from the Hopi High radio class interview teachers, coaches, administrators, students and community members. Those wanting to air an issue can call in at (928) 738-5111, extension 241.

Traci Talahytewa and Paul Quamahongnewa have returned to the class.

Hopi High also calls news briefs into KINO in Winslow and can be heard at noon.

The radio class is raising funds to attend the National Federation of Community Broadcasters Conference in March in Atlanta, Ga.